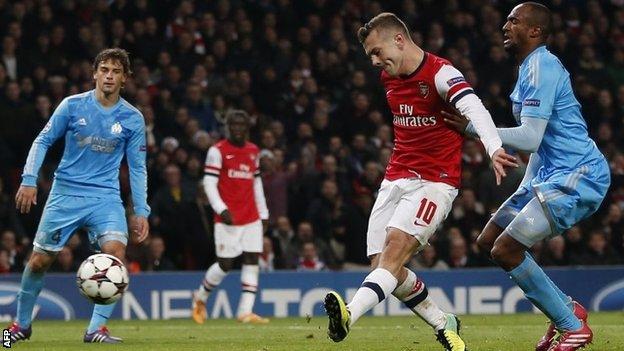 Arsenal only need to avoid a three-goal defeat in their final Champions League group game away to Napoli in Italy to reach the knockout phase after a comfortable win against Marseille at Emirates Stadium.

Arsene Wenger's side would already be in the last 16 had Rafael Benitez's team got a point against Borussia Dortmund as Arsenal completed the formalities against a poor Marseille.

Jack Wilshere scored inside 30 seconds and again after the break to keep the Gunners three points clear at the top of the group - but Dortmund's win against Napoli in Germany means the testing Group F will go to the final round of games.

How can Arsenal progress?

And with Arsenal securing a 2-0 win against Napoli earlier in the group games, a point will make qualification certain and only that three-goal margin could send them out.

Wilshere was the star of the show in a game the hosts controlled throughout, even affording the luxury of Mesut Ozil's first-half penalty miss as they continued their impressive Champions League form this season.

Wenger, with his team four points clear at the top of the Premier League, will now be confident of progress in Europe. They were barely troubled here by a Marseille side without a point in the group.

Arsenal's priority was to take care of their end of the bargain by beating the French team and await news from Germany - and they had the best possible start as they took the lead in their first attack inside the first minute.

Wilshere was given too much time and space in the area but still showed superb vision and technique to curl a left-foot finish high past keeper Steve Mandanda.

Mandanda had better luck stopping the Londoners taking a two-goal lead when when he blocked Aaron Ramsey at point-blank range when he should have rounded off fine work from Olivier Giroud and Wilshere.

The visitors' threat was fleeting at best but Arsenal keeper Wojciech Szczesny needed to be alert to come out at the feet of Andre-Pierre Gignac in a rare moment of anxiety.

Ozil was unusually off-key in the first half, his control letting him down when he was released by a touch of imagination and a lofted flick from Ramsey.

And the German was the culprit as he wasted the opportunity to double Arsenal's lead from the penalty spot as half-time approached when Ramsey was fouled by Nicolas N'Koulou.

The foul appeared to be outside the area and an element of justice was done as Ozil's sloppy penalty, delivered after a hesitant run-up, was saved by Mandanda.

Ozil almost made amends after 55 minutes when he ran on to Wilshere's pass but Mandanda was down quickly to save the £42.4m signing's poked finish.

He showed his quality as the Gunners finally established the advantage their superiority deserved after 65 minutes. Ramsey was the initial creator but Ozil's neat pass left Wilshere with the simple task of sweeping a finish past Mandanda.

Marseille substitute Florian Thauvin showed his rich promise in two moments of danger, first as Nacho Monreal cleared his shot off the line and then when Szczesny was forced to save low at his post.

But Arsenal survived those nervous moments to move to the brink of a place in the last 16.

To see a selection of images from tonight's action go to BBC Sport's Facebook page.