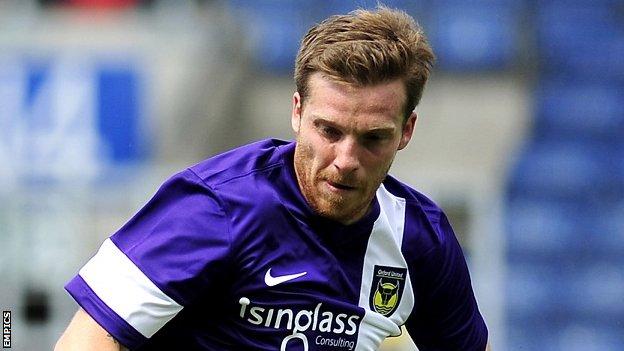 Both wide men scored in the 3-0 win over Morecambe that took Oxford to the top of League Two on Saturday.

Mullins told BBC Radio Oxford: "It was a brilliant performance, we moved the ball quickly and sharply, and the boys up top were unplayable.

"I don't think it would have mattered who we were playing or how they played, we imposed ourselves on the game."

All three goals came in the first half, allowing Chris Wilder's side to close the game down after the break.

Players like Ryan Williams and Sean Rigg are match-winners, they stretch the game, and allow others to get on the ball and play

Mullins enthused: "Ryan is really on fire at the minute, he's a dangerous player and he had their left-back in all sorts of bother. He's got that ability, he can come inside and outside, and he was brilliant in this game.

"Players like him and Sean are match-winners, they stretch the game, and allow other players like Dave Kitson, Asa Hall and Danny Rose to get on the ball and play."

Less happily, Rigg had to leave the field shortly after the hour mark with what appeared to be a hamstring injury, adding to a growing injury list that some supporters fear could derail the U's promotion challenge.

But Mullins said he had every confidence younger players in the squad would prove effective replacements.

"We have a lot of faith in younger guys who can come in, Josh Ruffles, Callum O'Dowda, Tyrone Marsh, Matt Bevans, to name but a few," he added.

"They've got real quality which we see everyday in training and if they have to come in we know they'll do a good job and work their socks off.

"We're a tight-knit bunch and we'll help them on their way just as they will help us with their enthusiasm and youthfulness.

"Going top of the league will breed confidence. When you play well you want to keep going, so having another game on Tuesday against Newport is good news."