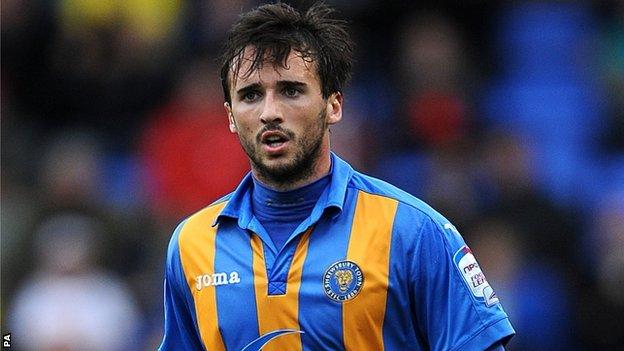 Wildig suffered ligament damage after a first-half challenge from Andre Boucaud, but will not discover the full extent until he has been scanned, once the initial swelling has gone down.

"It's going to be months rather than weeks, as he's damaged some ligaments."

Despite being born in Hereford, England, Wildig represented Wales at under-16 level

The Town manager added: "It looks quite bleak for Aaron, which is unfortunate for him and unfortunate for us. It's left us without Aaron's services for a potential number of months.

"The manner in which he's got his injury is appalling.

"I've had the opportunity to watch the tackle in slow motion - it is a bad tackle.

"There's no disguising it. He caught him knee high. On another day the lad would have been sent off."

Wildig, 23, has hit five goals in 57 appearances since signing for Town, initially on loan, from Cardiff City two years ago.

On-loan Nicky Wroe, Wildig's replacement from the bench on Saturday, is expected to come into the Town starting line-up for Tuesday night's home date with in-form Oldham Athletic.