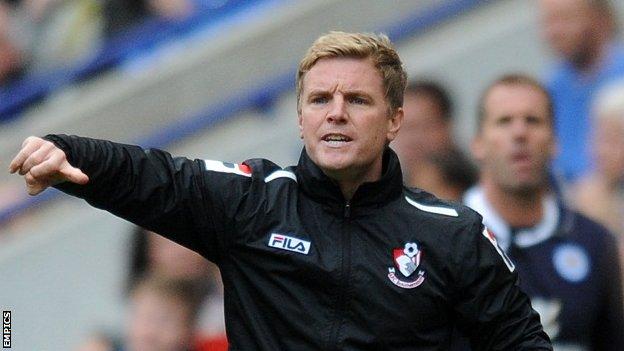 Bournemouth manager Eddie Howe has said the Cherries may look to bring in new faces on loan after one victory in their last nine league matches.

Howe has also called for supporters to be realistic in their expectations following Saturday's defeat by Derby.

"The performance and the result is not quite where we need it to be," Howe told BBC Radio Solent.

"It throws open selection for everybody in the squad and also the loan option becomes a possibility."

Howe has recently lost centre-half Elliot Ward for up to two months after the experienced centre-half suffered a pulled calf muscle.

He said: "On Saturday, the team was mainly the same as last season. We haven't made wholesale changes.

"The club has changed dramatically in recent years, it has to have done for us to get to this position, compared with where we were in League Two.

"But we are still fighting every day to try to compete with clubs and resources of the likes of Derby, so there does need to be that check in expectation."