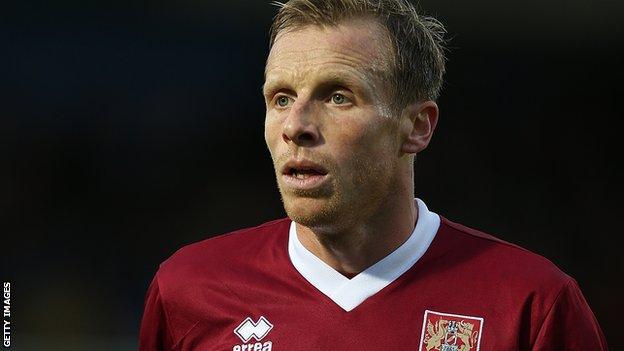 Northampton Town midfielder Ricky Ravenhill says they are grateful to have the chance to play again in League Two so soon after defeat to Hartlepool.

They go to second-placed Chesterfield looking to improve on eight defeats from nine games away from Sixfields.

"We've got to look back on things we've done well [recently] because we're more than capable of getting results.

"Luckily there's a game on Tuesday and we have to put it back right," Ravenhill told BBC Radio Northampton.

"We don't want to dwell on this one. If we go there and get three wins out of four, we'll be happy with that."

The defeat by Hartlepool was a discouraging backward step after good performances against Bishop's Stortford and the then league-leaders Fleetwood.

The Cobblers were, at least, defensively strong and the penalty was very contentious.

However, they have won just five of their last 36 away league games and although their remarkable home form last season carried them to the play-offs, it's not the same story this season, and their lack of a consistent attacking threat on the road needs sorting out fast.

"The vibe I'm getting [from the squad] is that we know we're not far off it. We were turning the corner, looking a decent team and we want to get back to where we were and make sure we get the win on Tuesday."

Northampton remained bottom of League Two after the 2-0 loss at Victoria Park, having beaten Fleetwood in their previous match.

And the loanee from Bradford was unimpressed by the awarding of a penalty to Hartlepool when Cobblers defender Paul Reid was adjudged to have fouled James Poole.

"There was a coming together, but he carried on from that and then swung and missed the ball as he got tackled," he said.

"It's never a penalty for me, but it's an easy decision for the ref to give, because the crowd is going to get on his back."

Ravenhill is on a month's loan from Bradford and manager Aidy Boothroyd has spoken of wanting to keep the 32-year-old at the club.

"I've enjoyed my time here and lads are great," he added. "But I just want to concentrate on football and get wins for this football club.

"I'm putting [my future] to the back of my mind and I've got a good few weeks left here on the first part of the deal anyway."