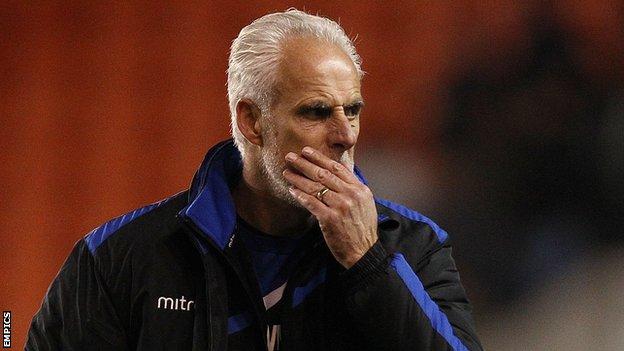 Ipswich Town boss Mick McCarthy has said defeat by Leicester on Saturday showed his side are still evolving.

The Foxes, second in the Championship and 15 points ahead of 12th-placed Town, came from behind to

"Leicester are a good side and they are better than us," McCarthy told BBC Radio Suffolk.

"They're in advance of us in terms of their development. But I think we've developed as a squad really well."

Ipswich have conceded 12 times in their last eight league games, slightly more than the 10 they let in during the previous eight.

But McCarthy, in charge of Town for his first full campaign, was encouraged by his side's victory over Blackpool two weeks ago - their first win against a side in the top six this season.

"Somebody just said 'you used to keep clean sheets and didn't give goals away'. But we score more goals now," he said.

"If we can tie them both together. Which we're desperately trying to do, we'll be a better team.

"Anybody who finishes above Leicester will be promoted, without any doubt."