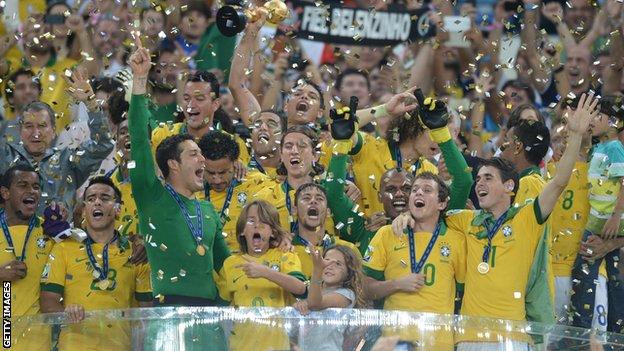 After the recent 5-0 demolition of Honduras, coach Luiz Felipe Scolari put on his best man-of-destiny steely glare and declared "Brazil will be world champions".

Seven or eight months ago such a claim might have been seen as a desperate piece of morale boosting, a reminder to players, press and public that no one can match Brazil's five titles.

But in late November 2013, it does not come across that way at all. It is a frank acknowledgement that, since the squad met up at the end of May to prepare for the Confederations Cup, Brazil have cruised into a position where they must surely be viewed as 2014 World Cup favourites.

How has this turn around come about? Below, I seek to identify six steps to pre-tournament heaven.

It is easy to criticise Mano Menezes, the coach who came in after the 2010 World Cup. The results achieved on his watch do not make for particularly impressive reading. But then again, he took over at a time when results were not the priority. Predecessor Dunga took an ageing squad to South Africa. A process of rebuilding was needed. 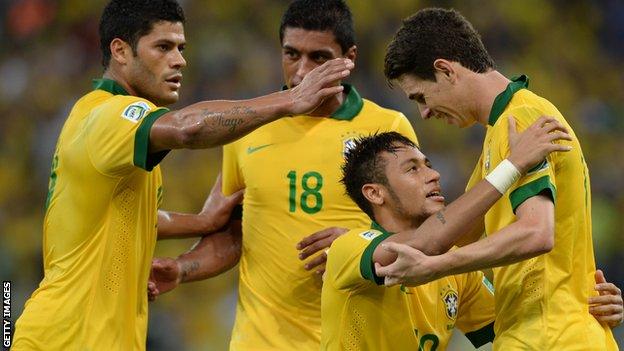 All of the players in Scolari's Confederations Cup squad had appeared under Menezes, including some who were by no means obvious choices at the time - and perhaps more important than the names was the method.

Right from the start Menezes stressed that, on home ground in 2014, Brazil would have to wean themselves off an over-dependence on the counter-attack. He worked hard on getting his team to press in the opposing half, not a traditional tactic of the Brazil national team. Such pressing set up the opening goals in both of Brazil's recent friendlies.

Brazil's current coach is not entirely comfortable with a high press - the fact that Neymar and Oscar committed more fouls than anyone else in the Confederations Cup shows he is worried by being caught on the break. Scolari may have struggled to have implanted the idea from scratch. He has taken advantage of the work done before him.

2: The importance of the warm-up friendlies in early June

Brazil had been leaking goals, the problems often emerging from the space in front of the centre-backs.

For the match against England at the Maracana Scolari sprung a surprise with the selection of Luiz Gustavo as a holding midfielder. Brazil dominated the first half, without creating much, and at the break Scolari went for broke, replacing Luiz Gustavo with the more attack minded Hernanes.

Brazil scored twice, but also conceded two - once more in the space in front of the centre-backs. Scolari came to a clear conclusion; he would not play without a specialist holder. A week later against France, a Luiz Gustavo tackle helped set up the opening goal in a 3-0 win - Brazil's first triumph against a top table nation in three years.

3: A flying start to the Confederations Cup

Japan, with not enough time to acclimatise after World Cup qualifiers in Asia, had one chance in the opening game against the hosts - frustrate Brazil for long enough for the pressure to rise and the crowd to become impatient.

Any such gameplan lasted just two minutes; with the opening chance of the game Neymar volleyed home a stunner - a huge personal declaration after a period when speculation about the move to Barcelona had affected his form.

4: An important penalty save 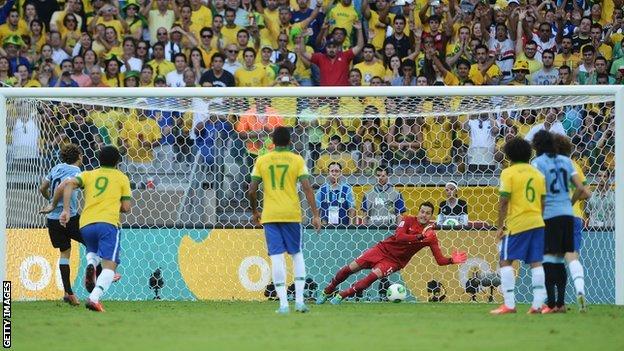 The game where Brazil did not come quickly out of the blocks was the semi-final against Uruguay. Suddenly there was more at stake. There was tension in the crowd and on the field - a perfect state of affairs for old rivals Uruguay, who so often play above themselves on such occasions.

They settled faster, and had a wonderful chance to take the lead after 12 minutes, with the first real chance of the game. David Luiz fouled Diego Lugano in the area, and up stepped Diego Forlan - the best player of the last World Cup - to take the penalty.

Brazil had not been behind in the tournament - always the true test of a side - and given the importance of the occasion and the experience of the opposition they might have found it hard to fight back. We never had the chance to find out. Forlan struck low to the left, and Julio Cesar flung himself to turn the ball round the post. Even so, it was a close run thing, a late goal giving Brazil a 2-1 win.

At this relatively early stage in the team's formation they may not have had the self-belief to come from behind. Now, after winning the Confederations Cup, it hardly seems to be a problem. In September in Boston they went 1-0 down to Portugal and barely batted an eyelid, ending up 3-1 winners.

5: An even more incredible save

In the final of the Confederations Cup Spain were starting to pass their way back into the game, recovering from the shock of conceding an early goal.

Three minutes before half-time they all but equalised, a combination between Fernando Torres and Juan Mata putting Pedro through, and his shot beat the keeper and rolled towards the line. David Luiz did wonderfully well just to reach the ball - and even better to turn it over the bar from close range.

It was an extraordinary clearance, whose value was clearer just a minute later when Neymar fired in the second. Straight after half-time Fred added another, and a potential 1-1 had turned into a rout.

With his team base sorted out, Scolari has been able to experiment from a position of strength. The recall of Maicon as reserve right-back has gone better than many expected, and Maxwell on the other flank is a nice contrast to the hot headed Marcelo.

Bringing Ramires back has given the option of a switch from 4-2-3-1 to 4-3-3, and the latest tweak, the recall of Robinho in a central striking role, was a surprise which has also exceeded expectations. Last Tuesday he headed the late winner against Chile, an appropriate end to a highly successful year for Luiz Felipe Scolari's Brazil.

Given the emergence of Javier Mascherano at Barcelona as a viable centre-back option for the Argentine national team, is coach Alejandro Sabella considering utilising him as the left-side centre-half in a traditional back 4 or a sweeper in a back 3 at next year's World Cup?

But there is no suggestion that Mascherano will play anywhere other than in front of the centre-backs.

Aside from the obvious Messi/Neymar, who do you rate as the best player from South America that we should all be looking out for next year?

The one not playing in Europe who stands out is Jefferson Montero of Ecuador, who tears defences apart from his position wide on the left. If he could only find more calm with his final ball and shot he could be a world beater. He's currently in Mexico with Morelia. Very nearly joined Cardiff in the last transfer window.

Another is Colombian playmaker Macnelly Torres, who recently moved to Saudi Arabia. I doubt he'll start every game at the World Cup, but he's a lovely weapon to have on the bench with a wonderful ability to unlock defences with his passing.