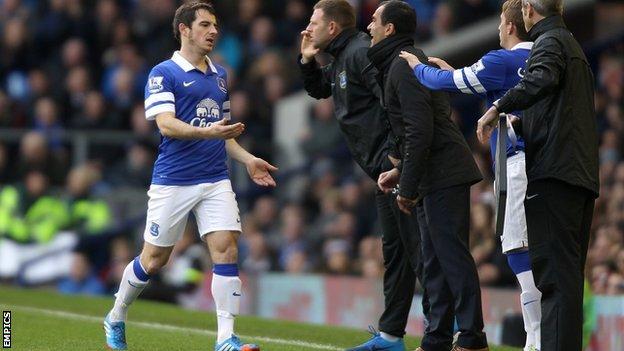 Everton left-back Leighton Baines has been ruled out for between 10 days and six weeks after fracturing a toe against Liverpool last Saturday.

The 28-year-old was substituted after 50 minutes of the Merseyside derby, which ended 3-3 at Goodison Park.

"Leighton has got a fracture in one of the bones in his right foot," said Toffees boss Roberto Martinez.

"It could mean anything from missing six weeks to being back in 10 days. It depends how the fracture heals."

Martinez, speaking to the Everton website, added: "It's in such a specific spot and we're going to see how [the injury] reacts.

"We need to see how it develops."

Baines has played in every game for Everton this season and has started each of their 12 league games and scored twice.

He has also made five appearances for England as he challenges Ashley Cole for the first-team berth in the national side.

Baines's absence will be a blow for Martinez, whose side are seventh in the Premier League and one point off the top four ahead of testing trips to Manchester United and Arsenal in their next three games.

United had a bid for Baines rejected in the summer and he now looks set to miss the 4 December game against the champions, who are managed by former Everton boss David Moyes.

"We have got other players at the football club who can play in that position, from Bryan Oviedo to Tony Hibbert and Sylvain Distin to John Stones," said Martinez. "We have got many, many options.

"It's going to be a matter of seeing how the players react in training and, first of all, seeing if Leighton is going to be okay."