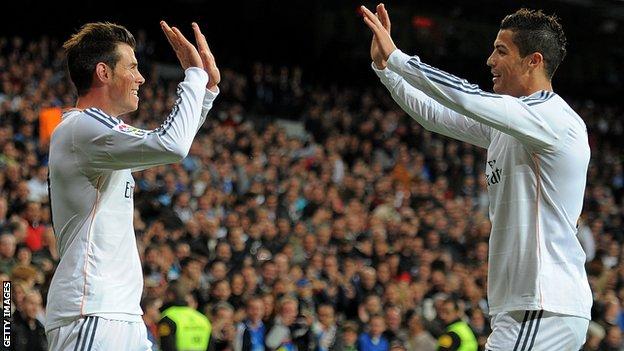 Gareth Bale has insisted there is no rivalry between himself and Cristiano Ronaldo at Real Madrid and says the Portugal forward is the best player in the world.

The pair have both started Real's last six matches, scoring 14 goals between them.

"There is no rivalry at all," the Welshman told The Independent.

"We get on very well. He's helped me out a lot on and off the pitch.

"We're enjoying playing together and I think the goals and assists show that we're playing well together.

"There's still a lot more to come from us both and hopefully we can have a successful season by doing that."

Ronaldo has been in stunning form for club and country this season, scoring 32 goals in 22 games, and most recently was Portugal's match-winner as he scored a hat-trick in a play-off win over Sweden that secured their place at the 2014 World Cup in Brazil.

The Wales international has scored four goals in his last five games for the Spanish club, and has provided a number of assists.

Both players are on the 23-man shortlist for the Ballon d'Or, but Bale believes Ronaldo deserves to win the award.

"For me, he is the best player in the world and I don't think anyone is near him," he added.

"He deserves that award. The goals and the performances he has put in, especially when you think of the pressure he is under, for Portugal the other day, it shows what a true, true world-class player he is."