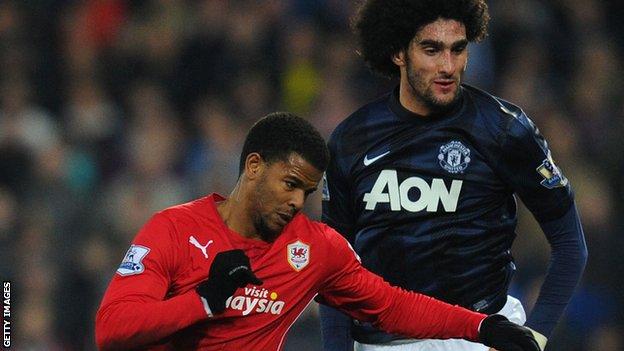 Goal scorer Fraizer Campbell said some Cardiff players were disappointed with just a point from their 2-2 draw with Manchester United.

The Bluebirds salvaged a point against the Premier League champions thanks to Kim Bo-Kyung's stoppage-time equaliser.

"Some of the lads are a bit upset that we didn't come away with maybe three points," he said.

"We've done exceptionally well against great opposition so it's a credit to us that we've come off the pitch maybe a bit disappointed that we've managed to score a last-minute goal to get the point."

"I think what they've found is coming into the Premier League has excited the crowd, the people around here.

"They've got a good spirit going. They've had big games at home that have been important for them and they've used them well.

"I think they'll be tough, but it'll be a long season for Cardiff. But Malky's done a great job and I think they've got a decent chance [of staying up]."

The champions were ahead again before half time when Patrice Evra headed in a corner, and Cardiff had to wait until added time at the end of the second half before Kim headed home Peter Whittingham's free-kick.

Before that Campbell had hit the bar with a chip from the edge of the box as Cardiff continued to impress in their first season in the Premier League.

"Every single player's got the same mentality we keep going right to the 90th or 95th minute or whatever it may be," he said.

"The manager's instilled that in all of us and we just keep going and going until the very end.

"You give it a bit more when you're playing such a great club.

"Man United's a massive team and you've got to up your game to stand a chance, and that's what every man has done - including the lads that have come off the bench.

"In your first season you've got to try and get as many points as possible and if you can make your home stadium a bit of a fortress it gives you a better chance to stay up.

"And we've done that this season. We've made it real difficult for teams to come here and we hope we can do that for the rest of the season and finish well."