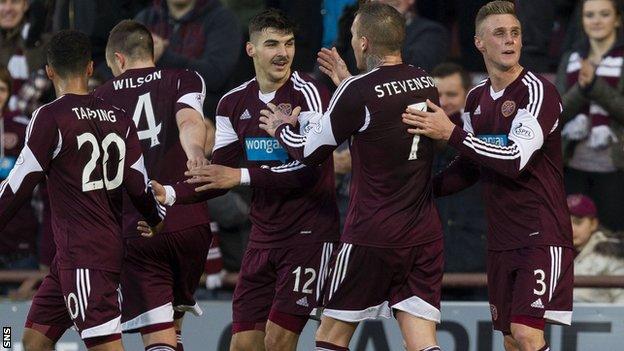 The Tynecastle side came back from a goal down twice to earn a point.

"Obviously, we'd have liked to have got three but they defended in numbers and made it really difficult for us," Locke told BBC Scotland.

"I was delighted to see the ball hit the net in the 87th minute. I don't know how we didn't win looking at the second-half performance."

The result took bottom side Hearts closer to Kilmarnock but Locke's men are still 12 points adrift, having started the season with a 15-point deduction due to the club going into administration.

"A great effort from the boys again," reflected Locke.

"It's been a difficult season but we never let our heads go down. We lost two really poor goals again and if we can eradicate that, we'll give ourselves a better chance.

"The reaction to come back from being a goal down twice was fantastic."

Hearts' thoughts will now turn to

Preferred bidders, fans' group Foundation of Hearts, are offering £2.5m towards debts of around £30m in a bid to take the club out of administration.

And the company voluntary arrangement requires the approval of creditors representing 75% of the club's debt.

"This is a huge week for the football club, it's a massive week," added Locke.

This is a huge week for the football club, it's a massive week

"I'm hoping that everything works itself out. If the CVA can be approved, it'll make a lot of Hearts fans, including everyone that works for the club, very, very happy.

"I don't know what the outcome's going to be but I hope it's a positive one.

"Every single person connected with Heart of Midlothian has done everything they possibly can and we just hope that we can get a positive outcome come next Friday."