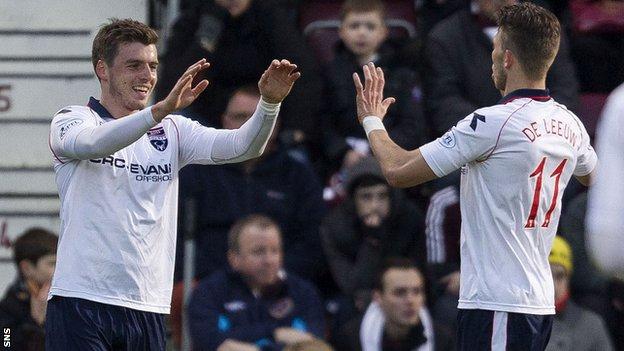 Derek Adams reflected on Ross County's "best performance of the season so far" against Hearts but was disappointed not to win at Tynecastle.

County led twice and had captain Richie Brittain sent off in .

"Offensively we were very good and defensively at times we had to be good because Hearts put a lot of crosses into the box," said Adams.

"I'm disappointed we haven't won the game because I think with 11 men we'd have definitely done that."

Adams had no complaints about Brittain's dismissal for two bookings and felt the match, in which Graham Carey and Melvin De Leeuw netted for the visitors, provided "a very good advert for Scottish football".

Ryan Stevenson levelled the match in the final minute to seal a point for Hearts.

"It was an excellent game," added Adams. "It was end-to-end from the start, two teams wanting to win the match.

"We hit the bar and were one-on-one with the goalkeeper a couple of times and I thought we should've been out of sight in the first half.

"Hearts obviously get the bonus that one of our players got sent off and then they get a lift from that and come into the game.

"Overall, I thought it was a terrific afternoon for Scottish football and it was good to see."