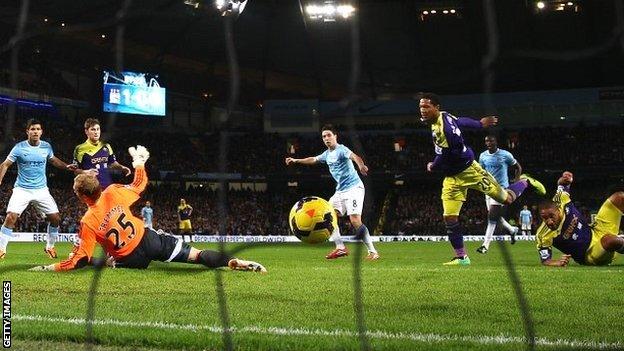 Samir Nasri struck twice as Manchester City moved into third in the Premier League with victory over Swansea.

Alvaro Negredo scored an early 25-yard free-kick but Swansea were on top in the first half as Costel Pantilimon saved from Jonjo Shelvey, and Jonathan De Guzman fired over from 12 yards.

Those misses proved costly as Nasri steered in after a mazy run.

The France midfielder then finished Pablo Zabaleta's low cross and was inches from hitting a hat-trick.

And although they were not at their fluent best against an impressive Swansea team, who controlled large parts of the game, they will be happy to remain in touch with the title contenders before hosting the Gunners on 14 December.

Before then, the 2012 Premier League champions face trips to West Brom and Southampton, games in which they will hope to improve on an away record that has produced only four points this season.

Swansea were without injured strikers Michu and Wilfried Bony and at times it showed as they chased a first win at Manchester City since 1951.

Pellegrini's side put six unanswered goals past Tottenham last week, but it was the visitors who dominated midfield possession in the first half at the Etihad, in addition to shackling the hosts' attacking full-backs Gael Clichy and Pablo Zabaleta.

After Negredo curled his free-kick into the top corner for his 12th of the season, Shelvey twice tested Manchester City goalkeeper Pantilimon - back in the side after Joe Hart was preferred in the midweek Champions League victory over Viktoria Plzen.

The giant Romanian had to use all of his reach to deny the Swansea midfielder, whose second shot from nearly 30 yards was superbly tipped around the post.

Sergio Aguero had another shot stopped by Gerhard Tremmel in the Swans' goal, before Martin Demichelis headed the resulting corner onto the crossbar - but compared with Swansea, the hosts looked ponderous in midfield.

The visitors then had a decent penalty appeal turned down when Demichelis appeared to pull Pablo Hernandez's shirt and they should have equalised just before the break.

The impressive Shelvey cut in from the right and slipped the ball through to De Guzman, but the Dutchman fired over from 12 yards with only Pantilimon to beat.

Aguero was guilty of a similar miss for the hosts after the break when he ran the ball out of play rather than shoot, but the game looked safer once Nasri ran onto Yaya Toure's pass, rounded the sliding Ashley Williams and steered the ball in.

The Swans were less effective after that, and Aguero was twice denied before Nasri grabbed his second, this time finding the bottom corner from Zabaleta's cross.

Manchester City boss Manuel Pellegrini: "I'm very pleased because we won against a very difficult team, especially when they had possession, we didn't play very well in the first half but in second we scored two goals and had more chances.

"Costel Pantilimon did very well, he didn't have too much work but when he needed to be there he really did well."

Swansea boss Michael Laudrup: "Our tactics before the game were to try and keep the ball and we played a good first half but you could see some of their players need a split-second to turn the game around.

"It's strange to lose 3-0 when we have done some many good things. That's the difference between having good players like we have and maybe the world-class players that play for them."