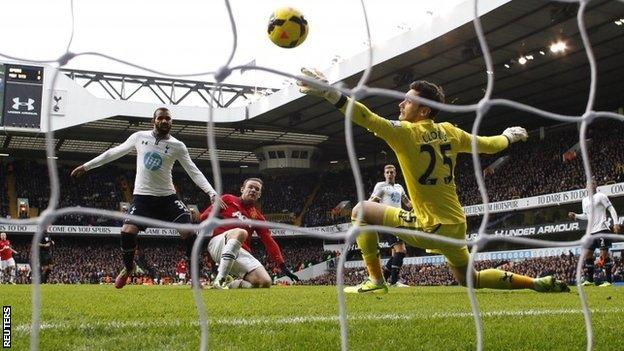 Kyle Walker put Tottenham ahead with a free-kick that flew under the United wall, but his mistake from a Phil Jones cross saw Rooney pounce to level.

Sandro fizzed a 25-yard shot into the top corner to restore Spurs' lead.

But United responded quickly when Hugo Lloris fouled Danny Welbeck in the box and Rooney fired home from the spot.

Rooney, who also played in Welbeck in the move that led to their penalty, has now scored five goals in his last five Premier League games and was a bustling, buzzing menace throughout.

The England striker's form, and the fact their unbeaten run in all competitions now stands at 12 games, gives United genuine reason for optimism, despite them sitting nine points behind leaders Arsenal at the start of December.

Tottenham are only a point below David Moyes' side in the table but came into the game with manager Andre Villas-Boas after a run of three games without a win, including last weekend's

Spurs' response against United, who they have not beaten at home since 2001, will not have answered all of Villas-Boas's critics but they showed plenty of spirit and far more attacking verve than they have mustered in recent weeks.

Both sides had spells on top in an open and entertaining game, but it was Spurs who struck first.

Jones let the ball drop over his head on the edge of the area before Jonny Evans sent Paulinho tumbling. From the free-kick, United's wall jumped over Walker's shot and it flew past David De Gea.

Tottenham's fans roared their side on in search of more goals but £26m striker Roberto Soldado blazed a good chance wide and the lively Aaron Lennon was denied by De Gea.

United had done little going forward in the first half hour but were gifted an equaliser with their first real sight of goal.

Walker did not expect Jones' searching cross to reach him at the back post and inadvertently played the ball into the path of Rooney, who slotted home.

United looked stronger at the end of the first half but found themselves behind again after the break when Sandro escaped Tom Cleverley and beat De Gea with an explosive strike.

Typically, Rooney led their fightback and had a pivotal role in their second equaliser three minutes later, playing in Welbeck and then drilling his penalty down the centre of the goal.

Both sides could have won the game in the final half hour, with Rooney seeing two chances to complete his hat-trick come and go, and Walker flashing another free-kick inches wide.

Welbeck should have done better after leaving Michael Dawson in his wake near the corner flag but could not pick out Rooney after skipping into the box.

In the closing moments, a delicious, bending Walker cross only just eluded substitute Andros Townsend at the far post.

It meant Tottenham missed out on the win they craved, but a draw was a fair outcome from a pulsating match.

"We had a great win in midweek and, but for a minute in Cardiff near the end, you would have been saying that Manchester United had a really good week. It is not an easy place to come, Tottenham.

"They had their own pride which they showed in their performance.

"United have to win. That was why in the end we were trying to get a third goal, but we could not quite do it."