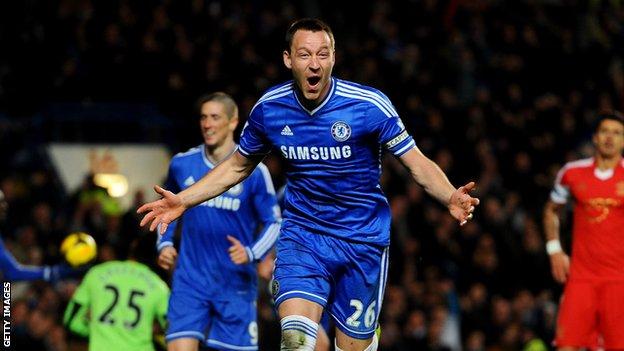 John Terry marked his 400th Premier League appearance with a crucial goal as Chelsea recovered from conceding inside 13 seconds to beat Southampton and go second in the table.

The Blues had actually moved up a place on goal difference before kick-off, following Liverpool's defeat at Hull earlier in the day.

But their hopes of staying there took an instant hit when an inexplicable Michael Essien volley allowed Jay Rodriguez to run through and put the visitors ahead.

However a vastly improved second-half performance, full of purpose, saw Chelsea take the lead through headers from Gary Cahill and his centre-back partner Terry.

John Terry is now fourth in Chelsea's list of all-time appearance makers, with 593, one ahead of John Hollins. Ron Harris leads the way with 795. Frank Lampard is third with 627. Terry has now also made 400 Premier League starts for the Blues.

And half-time substitute Demba Ba sealed victory in the final minute, sliding the ball home from close range after a Ramires cross.

Saints, who could have gone third with victory and had conceded just seven league goals in 12 games before kick-off, played with greater confidence and composure in the opening period.

The Blues, clearly mindful of the need for extra creativity against the most miserly defence in the Premier League, started with both Eden Hazard and Juan Mata.

But it was Essien - a surprise inclusion, making his first league start of the season - who had the immediate impact.

The Ghanaian's first touch saw him volley the ball aimlessly towards his own goal, straight into the path of Rodriguez, who calmly shot beyond Petr Cech.

It was a dream start for any side facing title-chasing opposition and helped Southampton erase any lingering self-doubt following the comprehensive 2-0 defeat against leaders Arsenal last time out.

The imposing presence of Victor Wanyama in the centre provided a solid base, and the equally muscular attacking threat of Rodriguez kept Terry and Cahill occupied.

But the Blues slowly regrouped and started to pose an occasional threat in attack, with Oscar the most likely source of a goal.

First the Brazilian went close with a fiercely struck 18-yard strike that was beaten away by Artur Boruc - later taken off injured - then he was unable to direct a close-range header wide of the Polish keeper after good work by Fernando Torres.

In between Oscar's attempts, the impressive James Ward-Prowse went close with a free-kick for the visitors, while at the other end a Torres header produced a fine save from Boruc.

An increasingly frustrated Jose Mourinho was forced to tinker with his system, replacing the injured Oscar with Frank Lampard before the break.

The Portuguese, who headed for the dressing a good couple of minutes before half-time, also cut short a miserable afternoon for Essien by bringing on Ba and playing two up front in the second half.

The change produced the desired effect.

Suddenly there was urgency and constant threat, as the hosts dominated possession and territory, buoyed by a supportive and passionate Stamford Bridge crowd.

Cahill reacted superbly to bundle in the equaliser, craning his neck to head home after Branislav Ivanovic's header was turned onto the post by Ba.

And Chelsea found themselves ahead when Cahill's partner Terry guided a towering near-post header beyond Saints' replacement keeper Paulo Gazzaniga and into the far corner.

The Londoners looked to seal the win and, with Mata increasingly influential, they probably should have done so sooner than they did.

He almost teed up a simple header for Torres, while Ba went close with a low strike across goal from the left.

Jose Fonte's mis-kick when well placed in the Blues box was a rare Saints attack in the second half, and Ba finally added the third after a bustling run by Ramires to take Chelsea back to within four points of leaders Arsenal.

Chelsea manager Jose Mourinho: "It was important not to panic and keep the emotional balance. We waited for half-time to change the game. Even when Oscar had to come out I wanted to bring in Lampard before changing things.

"The players were fantastic and it was difficult for Southampton. People are afraid to play two up-front as everyone has so many midfielders. We spoke before the game that with others losing points this was a must-win game.

"The younger players and new boys have to be better in the second part of the season but we go step by step. But the fact today was must-win and we were losing means mentally it was a good answer."

Southampton manager Mauricio Pochettino: "After we got the first goal it was fairly even-sided. Of course we are unhappy but there were a number of decisions that did not go our way. The ones you don't see are perhaps more important.

"There was no doubt that the players will react positively. But lest we forget, we were playing Chelsea!

"Boruc has gone to a clinic to get some X-rays. We don't know what he has done."