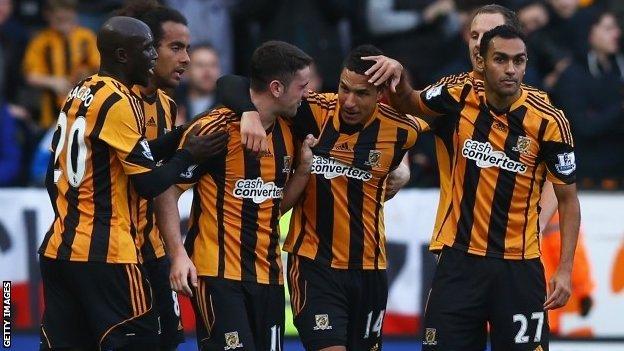 Hull claimed their first ever win over Liverpool as the visitors missed the chance to close on leaders Arsenal.

The hosts went ahead when Jake Livermore's shot took a wicked deflection off defender Martin Skrtel.

A precise free-kick from Steven Gerrard pulled Liverpool level but David Meyler capitalised on some poor defending to put the hosts back in front.

The victory, Hull's first in 17 meetings with Liverpool, only partially distracted the home fans from their defiance in the face of owner Assem Allam's comments earlier in the day.

Allam had claimed that fans opposed to renaming the team Hull Tigers could "die as soon as they want" and the Egyptian-born businessman was in the stands to hear chants of "we know who we are" in response.

Disruption to Liverpool's own preparations came as striker Daniel Sturridge, scorer of nine league goals so this season, was ruled out for six to eight weeks earlier in the day.

His team-mates missed the focal point that the England striker provides as they enjoyed plenty of the ball, but Victor Moses and Raheem Sterling struggled to support lone striker Suarez.

After last weekend's 3-3 draw with Everton, today's result means Liverpool have conceded three or more goals in successive games for the first time since 1998. The Reds started the season with three successive clean sheets.

Hull's opener came as Moses ambitiously attempted to beat Ahmed Elmohamady in his own half and was dispossessed by the Egyptian.

As the visitors tried to readjust, Livermore neatly swapped passes with Meyler before his low shot turned from solid to unstoppable courtesy of a flick off the back of Skrtel's heels.

The visitors lacked the attacking edge of recent weeks, and Curtis Davies's foul on Jordan Henderson on the edge of the box seven minutes later immediately looked like their best chance of the match so far.

And so it proved as Gerrard swept the set-piece through a hole in the wall created by Skrtel and into the bottom corner.

A tame first-time strike from Suarez was the closest either side came to heading into the break ahead, although Yannick Sagbo's chasing and physicality unsettled the Liverpool backline on a couple of occasions.

As the visitors' passing game continued to break down in the attacking third, Hull grew into the second half with Davies's header going just wide before Skrtel was forced into a hurried clearance.

Philippe Coutinho's introduction, after he had been unable to train during the week with an ankle injury, jump-started a spluttering Liverpool attack.

But moments after Moses had seen a close-range effort bravely saved by Allan McGregor, the Reds' creaking defence folded again.

Kolo Toure and Skrtel got in each other's way attempting a routine clearance and Hull were hungrier in their pursuit of the loose ball, David Meyler holding off Glen Johnson to plant a composed finish into the bottom corner.

Liverpool's attempt to take at least a point yielded few clear openings and the nearest they came was another free-kick as Suarez had McGregor scrambling.

Instead, after Sagbo and Elmohamady had both squandered one-on-one chances, Liverpool were outnumbered for a third time and Skrtel's despairing attempt to block could only turn Tom Huddlestone's scooped shot into his own net.

It completed a miserable afternoon for both the Slovak defender and his team.