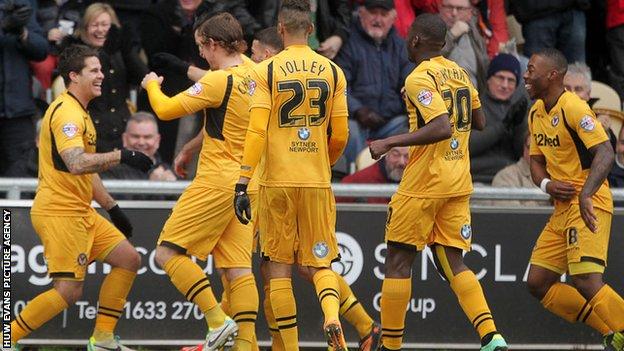 Newport County held on to beat 10-man Chesterfield 3-2 in an eventful game at Rodney Parade.

Liam Cooper was sent-off for bringing down Conor Washington, with Adam Chapman scoring from the spot.

Then Andy Sandell tapped-in a third for County before Mark Richard pulled a late goal back for the Spireites.

Newport survived a string of late corners to move into eighth place and deny Chesterfield a chance to take over in top place.

Newport County manager Justin Edinburgh told BBC Radio Wales: "I think today was our biggest test, we came up against the best team I think I've seen in this League and it's a fantastic win.

"We're normally used to putting teams to the sword here but credit to Chesterfield they came out in that second half and they pinned us back, they got the goal and at that time they looked like they were the team who were going to go on and win it.

"But my players showed great resilience and great focus and determination to make sure that they didn't allow another team to take points away from here."