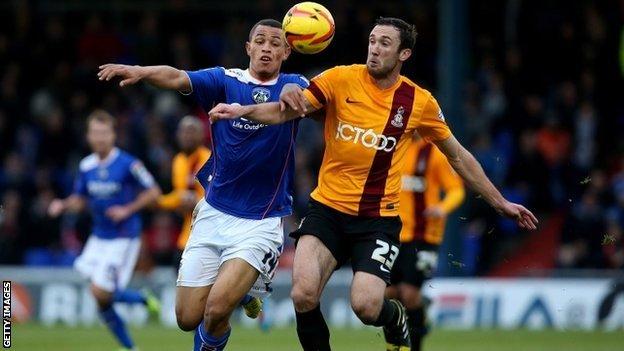 Bradford missed the chance to return to the play-off places after being held to a draw by in-form Oldham.

Nahki Wells hit the post for the Banthams from close range early on but he made no mistake in converting Garry Thompson's cross on 21 minutes.

But the lead lasted just two minutes as Jonson Clarke-Harris equalised with a superb drive into the roof of the net.

Bradford's Kyel Reid was booked for diving in the area, while Oldham went close through Michael Petrasso.

The result ends Oldham's four-match winning streak, although they are still unbeaten in seven home games.

"I thought it was an excellent game. It had a real derby feel to it.

"I thought in the second half we managed the game excellently and we kept possession. We probably didn't have enough chances for our possession but you've got to give credit to Bradford for that.

"I was really pleased with the way we won the ball back, particularly in the second half, very quickly. I think had we got another one, which we didn't, we probably could have gone on and demoralised them."