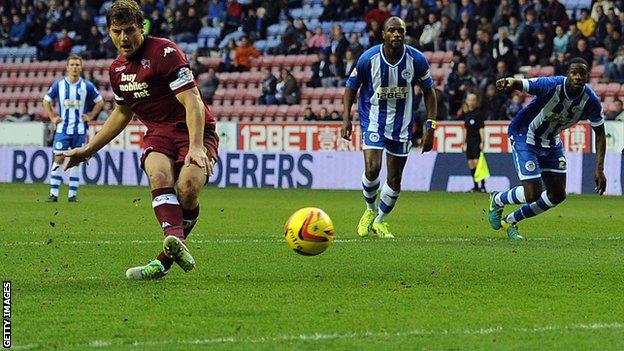 Derby County scored three times in the opening 29 minutes to beat Wigan Athletic and move up to fifth position in the Championship.

Steve McClaren's side sealed the win when Chris Martin converted a penalty after he was fouled by James McClean.

The Latics have now lost three consecutive games including a 2-1 defeat to SV Zulte Waregem in the Europa League on Thursday.

Wigan were never in this contest as confident Derby took the game to the hosts from the off and were rewarded when Bryson's superbly-placed set piece beat Lee Nicholls.

The Wigan keeper picked the ball out of his own net again 12 minutes later when Dawkins collected a loose ball from Ben Watson's error before finishing well.

Steve McClaren's side have now won six away games in the league this term. They claimed victory only four times away from Pride Park in the whole of last season.

Richard Keogh headed wide from another Bryson free kick for Derby, who continued to dominate, before Martin's ninth goal of the season put the league's top scorers further in front.

Wigan could have reduced the arrears moments before the break when Stephen Crainey's free kick came back off the crossbar.

But after being jeered off at half-time and bringing on Grant Holt and Roger Espinoza, Wigan improved in the second 45 minutes.

They scored immediately through Powell's header, his sixth goal of the campaign, from Emmerson's Boyce cross and had numerous chances to set up a grandstand finish.

Jake Buxton sliced a clearance against his own bar from Holt's cross before Lee Grant made a fine save to keep out on-loan Manchester United midfielder Powell's volley.

"The expectation can only come from being in the Premier League because it's not as if Wigan Athletic have been winning games every week for four or five years, far from it.

"If people want to be ultra critical that's the nature of football these days. I'm old enough to deal with that. If they think there's something better that's all well and good."

"I've played many Sunday games after Europe and they are so hard.

"Normally you play the first half to get to the second half, that's what we call it. So we said we have to play a high tempo first half, squeeze, press, and the team did that.

"I think we took Wigan by surprise and the goals were terrific, the football was terrific and we controlled the game from start to finish."