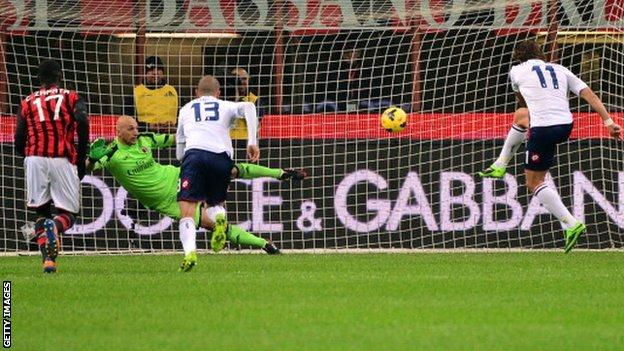 AC Milan's poor form continued as they were held to a 1-1 draw by Genoa, despite taking the lead and playing against 10 men for almost an hour.

Kaka gave Massimiliano Allegri's side the perfect start with a fine finish after just four minutes.

Alberto Gilardino equalised with a ninth-minute penalty but Genoa's Thomas Manfredini was sent off for a foul on Mario Balotelli in the 36th minute.

But Balotelli saw his ensuing penalty saved and Milan were held.

Allegri's team, who are 11th, are without a Serie A victory in five attempts and have won just two of their opening 13 league matches.

Third-placed Napoli were beaten 1-0 at home by Parma, their second consecutive defeat after a 3-0 loss to Juventus two weeks ago.

Antonio Cassano scored the winner for Parma in the 81st minute after an impressive solo run.