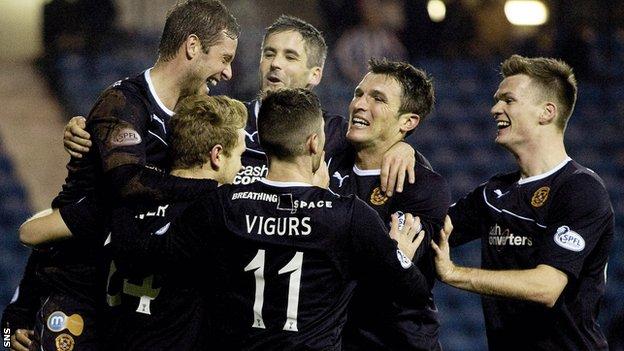 Motherwell manager Stuart McCall viewed as a return to form.

Second-half goals by John Sutton and Henri Anier lifted the Steelmen to third in the Scottish Premiership after recent league setbacks against Dundee United and St Johnstone.

"It's a clean sheet and a really good, positive performance," said McCall.

"Today we were back like ourselves. We were strong when we needed to be and we also played some good football."

Motherwell ought to have been ahead at the interval but Craig Samson made a fine save from Sutton after the striker had been picked out by Fraser Kerr's cross.

And Craig Moore had two opportunities to break the deadlock, seizing on hesitancy by Sammy Clingan and a slip by Mark O'Hara, but firing wide on both occasions.

However, McCall had nothing but praise for 19-year-old Moore, to whom he handed a debut earlier this season.

"I thought he was terrific," said the manager.

"He is a strong, little, hardy boy. I made my decision to play him two weeks ago when he came on against Dundee United. He's infectious.

"We said to him at half-time not to let the misses affect him. He was a real key part of our performance.

"After our form in recent weeks, nobody really can be assured of a place but the one person who deserved to start today and be the first name on the team sheet was him.

"Not only did he do it as a sub but in the Under-20s and in training. He merited his chance."

McCall was happy at the way his full-backs Kerr and Zaine Francis-Angol provided crosses for Sutton, with Simon Ramsden out injured and Steven Hammell on the bench.

"We set up to play in a certain way," added McCall.

"The full-backs got high and wide and put some good balls in. We were disappointed to go in at half-time and not be ahead.

"Zaine and Fraser are attack-minded and lot of times it worked well when they were up the park.

"All in all it was a good day.

"Sometimes when you miss chances they come back to haunt you but thankfully that was not the case today and Henri came on and put the icing on the cake for us."