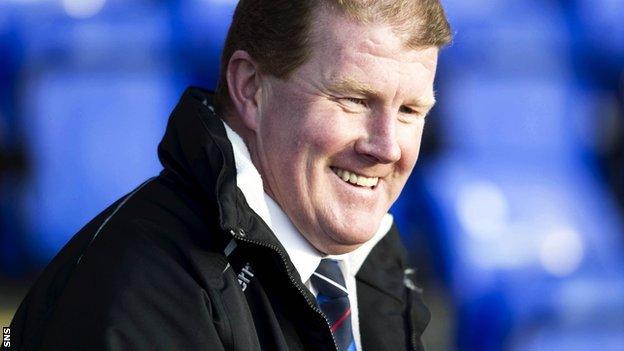 Inverness CT caretaker manager Duncan Shearer was delighted with the role the fans played in getting his side over the line against St Johnstone.

Billy McKay's early goal was enough to give them a narrow 1-0 win over Tommy Wright's Perth side and stay second in the Scottish Premiership.

"I thought the fans were terrific," said Shearer.

"They knew we were under some pressure at the end and got behind us which was immense."

Caley Thistle were put under some late pressure from the Saints but the hosts, who are looking to have a new manager in place for the Scottish Cup tie at home to Morton next week, held on.

Former boss Terry Butcher and his assistant, Maurice Malpas, moved to Hibernian to take a similar role at Easter Road.

"I didn't enjoy the game but I was delighted for the back four," said Shearer, a former Aberdeen striker in his playing days.

I didn't enjoy the game but I was delighted for the back four.

"Because they got rubbished about down there [at McDiarmid Park] last time and they were determined that it wasn't going to happen again today.

"They were backed up by the midfield and of course wee Billy [McKay] who got the goal for us.

"He didn't do much for the rest of the game but I'll take that kind of striker any day."