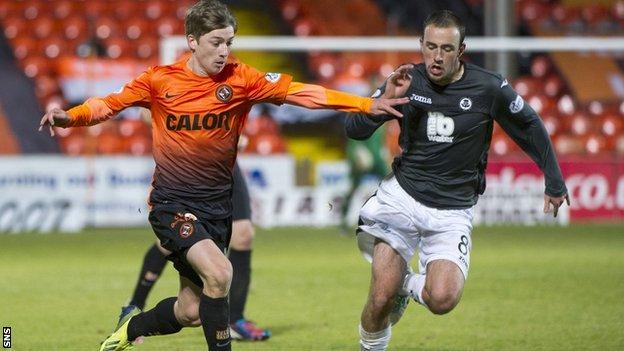 Gauld laid on the final pass for all four goals as the Tannadice side made it three Scottish Premiership wins from their last four.

"He's got the ability to see the passes before everybody else in the stadium can see it."

McNamara was pleased with all of the goals but channelled special praise in the direction of 17-year-old midfielder Gauld, who took a knock at the end of the game.

"Like every United fan, your heart's in your mouth and you want to make sure he's okay because he's a special talent," said McNamara.

"Hopefully it's just a wee bang that he took and he'll be okay.

"His awareness and the actual weight of the pass - you see that in the fourth goal for Brian.

"I'm delighted for him [Graham] as well, its his birthday today and he's been waiting on his first goal for the club, so hopefully that settles him down.

"We showed a lot of good character to come back and get a win we thoroughly deserved."

Despite United's domination in the opening 45 minutes, they went in only 1-0 up at the break.

Alan Archibald's Thistle side rallied at the start of the second half and equalised when John Souttar's handball led to a penalty which Aaron Muirhead converted.

McNamara added: "You're thinking it's maybe one of these days when things go against you in a game where you should be out of sight.

"But credit to the lads and our left-back [Robertson] pops up again and makes it 2-1, a fantastic finish.

"The good thing is we're creating the chances."