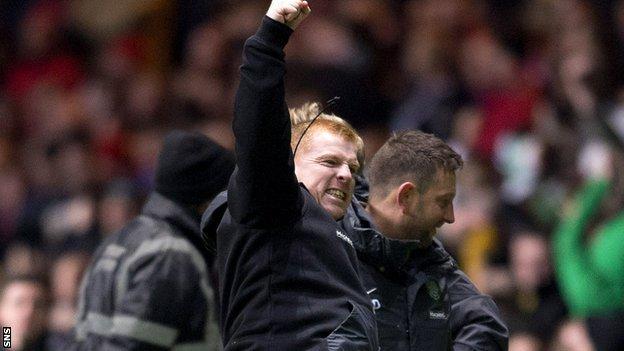 Neil Lennon says Celtic will be ready for AC Milan's visit despite leaving it late to win against Aberdeen.

Derk Boerrigter and Kris Commons netted in injury time to beat the Dons 3-1.

"The Champions League will take care of itself," Lennon told BBC Radio Scotland.

"In your subconscious you're lifted because it's the glamour competition. It's the best competition to be in. So, automatically there's a self-motivation."

We're dominating games and, with the amount of possession we have, we should be putting teams away earlier

It will be Celtic's penultimate game in Group H and a win over the Italians is crucial to their hopes of progressing to the first knock-out round.

Against Aberdeen, Commons had opened the scoring for the hosts before Niall McGinn equalised at the end of the first half.

And the post denied Northern Irishman McGinn from putting Derek McInnes's side in front, meaning the late onslaught by Celtic stole all three points.

"It's just trying to get them, not motivated for these games, but just concentrated fully with a huge game looming in a couple of days time," said Lennon.

"The game's 90 minutes, so we kept going. [We] dominated the game for the most of it. I thought we deserved the win and I'm thoroughly thrilled with the team and their character as well.

"We're dominating games and, with the amount of possession we have, we should be putting teams away earlier, put it that way.

"Thankfully we saw it through today. It's a brilliant win.

"We stay unbeaten and at the top of the table."

Anthony Stokes was not in the squad due to personal reasons but Lennon confirmed the striker will be back in training on Monday.

Lennon also spoke of his happiness for winger Boerrigter, who notched his first goal for Celtic in the victory over Aberdeen.

The Dutchman joined from Ajax in the summer but has been in and out of the side due to injury.

"It's been a frustrating time for him but he showed his qualities and the goal will give him a massive boost of confidence," Lennon added.

"I'm very pleased with his contribution."