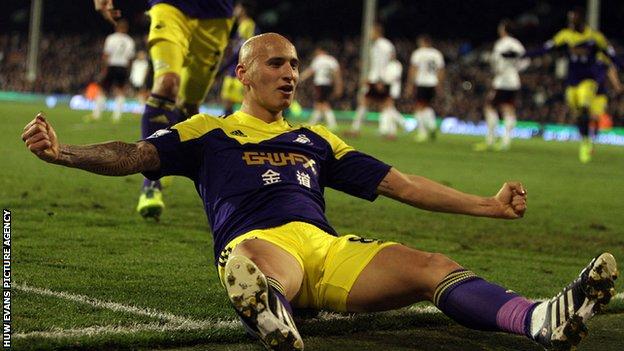 Swansea City midfielder Jonjo Shelvey was happy to secure three points after coming off the bench to score a spectacular winner against Fulham.

Shelvey's 79th-minute goal gave Swansea their first win in six matches, and was a relief to the England international.

"We've been giving a few goals away lately at the end of games, so it was good to finally get three points and start climbing this table."

The result lifts the Swans to 10th place in the Premier League.

However, Swansea's recent tendency to surrender one goal leads was in evidence again as Scott Parker's 63rd-minute chip wiped out Aaron Hughes's own goal.

But Shelvey, a 59th minute replacement for Nathan Dyer, skipped past a couple of tacklers before firing in a rising shot with 11 minutes remaining.

"I've come into the middle of the pitch off the flank and skipped past a couple of tackles and challenges and then put it into the top corner," was Shelvey's succinct description of the goal.

"It's just one of them things - it just happens. You don't really think about it at the time - you just do it."

Manager Michael Laudrup conceded he was lucky to have a player of Shelvey's quality on the bench, and that squad depth was key for Swansea as they enter a busy time of the season.

"It's a luxury to have certain players you can bring on," said Laudrup.

"But I said to the players before the game- I think we play now twelve games in just 43 days, so we need everybody.

"And I think it's great to see people come on from the bench and decide the game."

Laudrup was also pleased with the manner of his team's performance at a time when questions were beginning to be asked about their apparent loss of form.

"We played very well, especially in the second half and even in the last 15-20 minutes of the first half so I think it was well-deserved," added the Dane.

"It was very important to get points or a point today and we kept on in our way of playing, we didn't try to change to play more simple, more direct, we still want to play the same kind of football.

"It's not always easy when you have a lot of added pressure on your shoulders so I really have to say congratulations to the team."