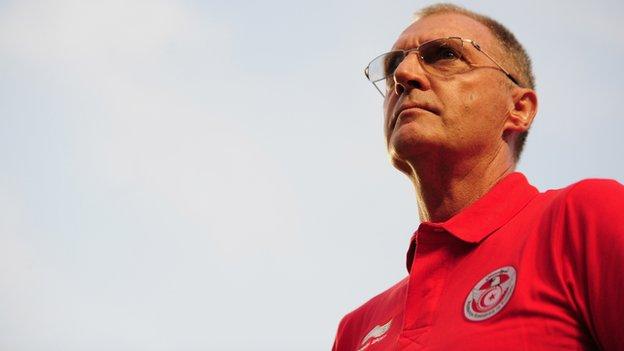 He scored for Ruud Krol's (pictured) side with a low shot from the edge of the area following a pull back from Fakhreddine Ben Youssef.

Taha Yassine Khenissi then added to Sfaxien's advantage with a goal in added time at the end of the match in Rades.

Mazembe will take some confidence from the fact they have won all their matches at home this season in continental competition going into the second leg in Lubumbashi next Saturday.

Sfaxien are aiming to remain the most successful club in the Confederation Cup by lifting the trophy for the third time after success in 2007 and 2008.

The Tunisians were also runners-up in Africa's second-tier club competition twice 2010, when they were narrowly beaten by Morocco's FUS Rabat 3-2 on aggregate.

Mazembe are making their first appearance in the final of the competition but have been crowned African champions four times in 1967, 1968, 2009 and 2010.

The overall winners will pocket a total prize money sum of $660,000 (nearly 500,000 euros). They will also face the African Champions League winners Al Ahly of Egypt in the Confederation of African Football Super Cup early next year.