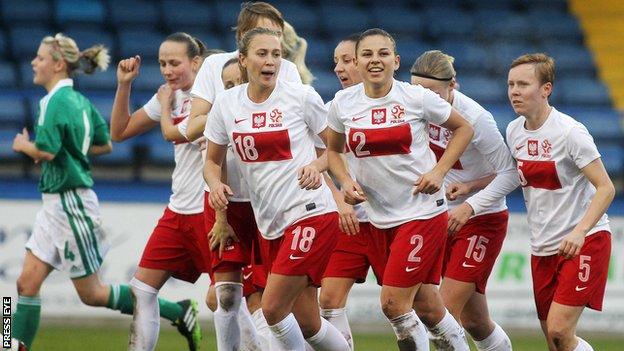 Northern Ireland's women remain without a goal in their World Cup qualifying campaign as they were comprehensively beaten by Poland at Mourneview Park.

Patrycja Pozerska did most of the damage for the Poles as she scored both first-half goals and also set up the the late third goal for Magdalena Szaj.

In addition, Nicole Krzysik missed a second-half penalty for the Poles.

Pozerska put the Poles ahead on four minutes and she then doubled the advantage on 29 minutes from the penalty spot after Aimee Mackin had been adjudged to have transgressed.

Krzysik struck the woodwork from her 60th minute penalty after been surprisingly handed the task instead of Pozerska.

But Pozerska wasn't finished as her pass set up the 87th-minute third goal for Szaj.

Northern Ireland's next qualifiers will be the back to back games in April when they are at home to Sweden (5 April) and away to the Faroe Islands (9 April).