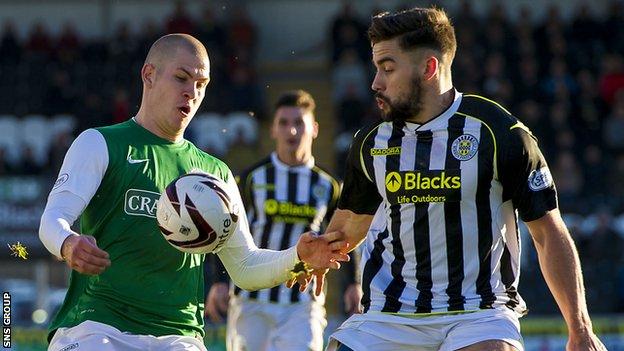 Manager Danny Lennon was pleased to extend St Mirren's unbeaten run to three games after a battling 0-0 draw with Hibernian in Paisley.

The visitors were out to impress new boss Terry Butcher and the game was high on endeavour but low on thrills.

"These points, come the end of the season, will be very valuable," Lennon told BBC Radio Scotland.

"Every Hibs player was playing for a jersey, to prove themselves, and we more than matched them."

The Paisley side remain a point behind seventh-placed Hibs, with a game in hand, having lost just one of their last seven matches.

"It keeps the momentum going," added Lennon. "The group of players have come a long way in the last five or six weeks after a well-documented slow start to the season."

Steven Thompson squandered a good early chance as the hosts did most of the pressing in the first half.

Hibs enjoyed the bulk of possession after the break and the Buddies needed to repel a series of corners and crosses into their penalty box.

"I felt we played the better football and created the better chances but there wasn't much football in the game after the first 15 minutes," said Lennon.

"That just showed the endeavour, commitment and graft from Hibernian and it was very important that we matched that.

"We did that very, very well.

"Perhaps, earlier in the season, that would have been one where we came away with nothing.

"I was delighted with our youngsters' appetite and their hunger for the game.

"It's another great learning curve for them. It's important that when games are so tight like that, you need to pick up something."