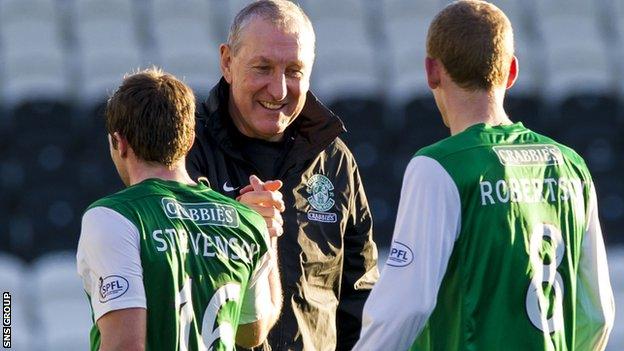 Terry Butcher declared himself "reasonably content" after his first match in charge of Hibernian ended in a goalless draw at St Mirren.

"But I thought it was a great performance from my boys, particularly in the second half.

"The more the game went on the more they gelled and I thought it was just a matter of time before we got a winner."

Neither goalkeeper was seriously tested in a game low on thrills but the visitors did the lion's share of attacking after the interval.

Hibs delivered several crosses into the penalty area and won a series of corners but could not apply a finishing touch.

It means the Edinburgh side have gone five matches without a goal and remain the Scottish Premiership's lowest scorers but Butcher was heartened by the application of his new players.

"We haven't had much time to work with the team and there has been injuries as well - James McPake pulled out during the week," explained the former England captain on BBC Radio Scotland.

"It wasn't the ideal preparation. The understanding wasn't quite there in the first half.

"These boys have lost the last four on the spin. Confidence has been low but self-belief comes quickly if you do the right things.

"For me, they are all heroes because they are under massive pressure. Everyone is expecting miracles but it is not so much revolution as evolution.

"We'll get there but it could be a gradual process and that's a good start."

Butcher's plans had to be changed after five minutes in Paisley as striker Paul Heffernan was withdrawn with a thigh injury.

"I thought 'here we go' but it gave James Collins an opportunity and he took it with both hands," Butcher said. "I thought he was tremendous.

"He was running into channels, he was strong, he was holding the ball up, he was a threat, he was a presence

"I was pleased with our forward play and the way we got in behind them."

Asked about doing business in the January transfer window, Butcher replied: "That's a long way off.

"We've only had six training sessions and one game, We'll just keep implementing the style that we want to play.

"I was really pleased with the fitness levels. We weren't too sure about that but the more the game went on the fitter and stronger they looked."