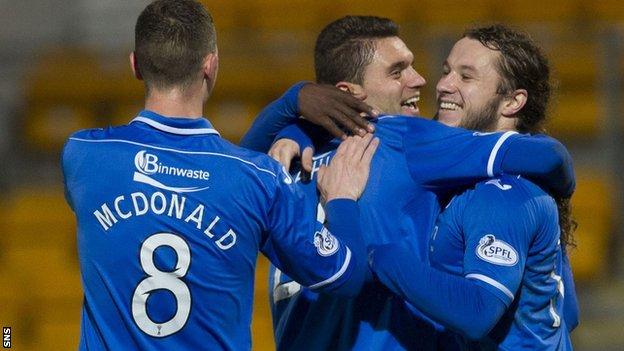 St Johnstone moved into the fifth round of the Scottish Cup with a comfortable home victory over Livingston.

Murray Davidson set up Stevie May to fire Saints ahead midway through the first half.

And Sanel Jahic converted David Wotherspoon's cross after the break to double the home side's advantage.

Callum Fordyce and Marc McNulty had chances for Livi but the Championship side could not peg back their Premiership hosts.

May, Wotherspoon and Nigel Hasselbaink all had unsuccessful efforts as the home side dominated the early stages.

Goalkeeper Alan Mannus came to the rescue for the Perth club when he tipped a header from Fordyce over the bar.

St Johnstone still looked the more threatening and Wotherspoon curled a free-kick from 25 yards just wide of the post.

However, the goal eventually arrived and there was no surprise that the scorer was on-form May.

He still had a bit to do when he took a pass from midfielder Davidson, but from 20 yards, drove a right-footed shot which sped past the flailing Livi keeper Kevin Walker.

Wotherspoon escaped their defence and nearly doubled the lead but the former Hibernian player drew his left-footed drive wide of the far post.

John McGlynn's Livi came closer to levelling in the closing stages of the first half, Mannus making an identical save from another Fordyce header.

Mannus was proving to be a key player as he made another good stretching save from McNulty's powerful angled-drive.

Just after the hour mark the cup-tie was all but over when Wotherspoon's free-kick by-passed Walker, with Jahic on hand to bundle it over the line from inches out.

The Bosnia and Herzegovina defender scoring on his first start since joining the Perth club in October.

As Livingston left gaps trying to get back into the match, Hasselbaink selfishly shot over the bar from inside the box when he had options either side.

With eight minutes remaining, Fordyce hammered a loose ball wide of the target and McNulty watched in agony as his attempt by trickled past the post with Mannus beaten.

Saints substitute Rory Fallon crashed a header off the bar before Simon Mensing also hit woodwork with a looping header as Livingston kept battling to the end.

St Johnstone manager Tommy Wright: "They had a few chances towards the end.

"It was a little uncomfortable, but I think we deserved to win.

"They can point to the fact that Alan Mannus has made a few saves, but I think we had most of the possession and created enough chances ourselves."

Livingston manager John McGlynn: "We are a bit disappointed with the scoreline to be fair. I think we put enough into the game to possibly bring it back to Livingston.

"In the first half, their goalkeeper has had two great saves. Towards the end of the game, we've had a number of chances and, if we take one, we've got St Johnstone on the rack, and possibly would have got a second goal.

"That's the difference when you play a Premiership side. They can be clinical and, if you don't take your chances, you end up losing the game."