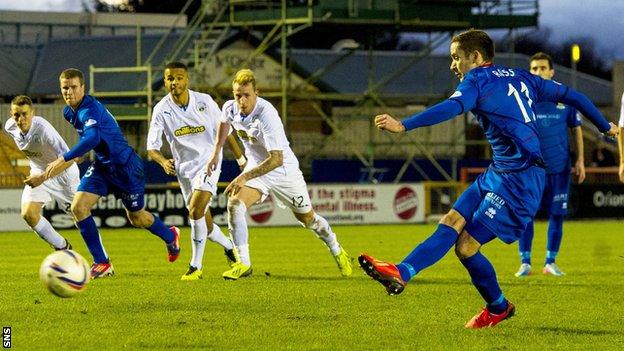 Inverness scored two penalties as they beat Greenock Morton in the fourth round of the Scottish Cup.

Craig Reid was judged to have fouled Ross Draper and Nick Ross converted from 12 yards before half-time.

After a power failure temporarily delayed the second half, Billy McKay headed the hosts' second and struck their third.

And, after Scott Taggart had been sent off for fouling Torbjorn Agdestein, Aaron Doran netted the second penalty.

Caley Thistle eventually progressed to Monday's fifth-round draw but Morton made it hard work for them.

The game was delayed by 35 minutes at half-time due to a failure at an Inverness electricity substation.

In the early stages, Doran set up McKay to shoot narrowly by and then did the same himself before being denied by the first of Nicolas Caraux's great saves.

Morton's first chance came when the ball broke to Nacho Novo and his 25-yard shot was well tipped over by Dean Brill.

Caraux's heroics resumed when he denied McKay twice, although his knowledge of the second save may have been limited.

Novo created more danger when he pounced on a loose pass back from Carl Tremarco and it was only a chance deflection which denied him a shot on goal.

Caraux denied Draper who, in the last minute of the first half, was fouled in the box by Reid. The Morton players hotly disputed the penalty decision but Ross converted the kick.

During the half-time interval the Caledonian Stadium was plunged into darkness. The electricity supply was restored just in time to avoid an abandonment.

And it was Caley Thistle who seemed to power up faster than their opponents with McKay just missing getting his head to a Graeme Shinnie cross before Draper squandered a chance at the right post.

Inverness got their second in the final quarter of the match and it was the kind of goal which the Morton defence had been denying them for much of the game.

Tremarco crossed from the right and the predatory McKay was on hand to head in from close range.

The game threatened to boil over when Dean Brill dived to retrieve a ball he had spilled but the ruck of players dispersed.

Into the latter stages, Doran swung a ball over from the left which found McKay for his second and Inverness's third.

Then into stoppage time, substitute Adgestein's first act on the pitch was to be upended by Taggart who was red carded.

With Ross now off the pitch, the penalty was taken by Doran rather than McKay try for his hat-trick and Caraux was obliged to concede a fourth, which his performance did not deserve.

Greenock Morton interim-manager David Hopkins: "I think 4-0 flattered Caley. The penalty at half-time has just knocked the stuffing out of us. I'll need to see it again but I thought it was very soft, and even when Nacho [Novo] equalised I thought it was onside.

"But, it was two penalties and two goals, and that was us."

Inverness Caledonian Thistle interim-manager Duncan Shearer: "That was a hard one. I watched them a couple of weeks ago and believe me that was a different side that I watched. It's all credit to the new manager in charge.

"Fair play to David [Hopkins], they pushed another man up and they tried to get something out of the game. They had a couple of cross balls that caused us problems, but once we got the third I thought we were home and dry."