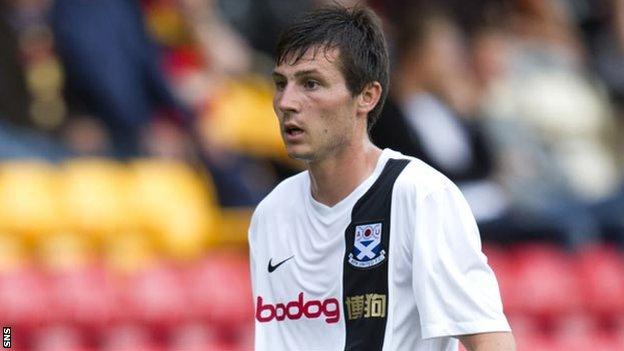 Ayr United earned a deserved replay with a second-half fightback but may regret not taking the many chances they had to win this tie on home soil.

They dominated the first half but went in at the break a goal down, Andy Geggan sweetly converting a rare Dunfermline opportunity.

The second period was a more balanced affair, but Ayr got their equaliser through Michael Donald.

Dunfermline subsequently had the better chances to win it.

But Ayr could and perhaps should have been out of sight long before then against their League One rivals.

The visitors, despite creating very little else in the opening stages, scored a fine opening goal.

Ross Millen whipped in a low cross from the right and Geggan clipped a lovely first-time shot high past David Hutton in the home goal.

Having passed up numerous opportunities before and after that strike, Ayr eventually drew level early in the second half.

Kevin Kyle headed into the path of Donald, who fired a low drive into the bottom left-hand corner of Ryan Scully's net.

Dunfermline looked more dangerous in the closing stages, with Ryan Thomson, Shaun Byrne and Ryan Wallace all going close to a winner.

However, Ayr could have been forgiven for wondering just how they went in behind at the interval, having created significantly more problems for the opposition defence.

Kyle's presence was a thorn in the side of the visiting back-line from early on and, even before Dunfermline made the breakthrough, he could have had his side in front, only for Scully to push his shot away.

Moments before Dunfermline made the breakthrough, Ayr almost scored a contender for goal of the round as Michael Moffat and then Anthony Marenghi had shots blocked at the end of a move that started deep in their own half.

Another Kyle effort squirmed under Scully but crept wide of the post and, as the half drew to a close, Marenghi was denied twice, with Moffat and Donald also going close to an equaliser.

It finally came through Donald, but Mark Roberts' team may feel their best chance of progressing to the last 16 has gone.