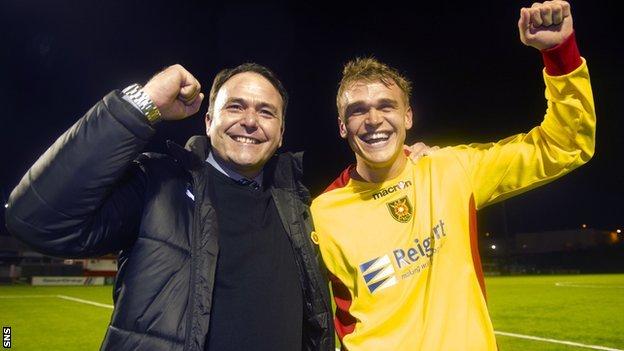 After a quiet opening 75 minutes, Mark McGuigan came close for the League Two side with a shot wide.

Well responded and John Sutton had a header kept out by goalkeeper Neil Parry.

And then, in the final minute, Gary Phillips' left-foot shot beat Gunnar Nielsen to give Rovers victory.

So the team sitting third bottom of the Scottish Professional Football League stunned the side who are third top of it.

The Coatbridge side had not beaten Motherwell outside the Lanarkshire Cup in 34 meetings in the league and Scotland's two major cup competitions.

And they ceded home advantage by moving the tie to New Douglas Park, with the Motherwell support forming the vast majority of the 2,950 crowd.

The game was briefly held up in the early stages when a smoke bomb was thrown on to the pitch from the Motherwell support.

Apart from several runs from Zaine Francis-Angol, Well did not threaten to break through before Rovers wide player Liam Cusack shot on target.

Motherwell's Bob McHugh headed over and Stuart Carswell dragged a shot wide from the edge of a crowded box.

And Rovers had the best chance of the half when Philips' bouncing cross reached Chris Dallas, who got in ahead of Shaun Hutchinson but could not keep his half-volley down.

Motherwell got their first effort on target just after the restart but Lawson's powerful strike took a deflection that saw the ball loop into the hands of Neil Parry.

But the Scottish Premiership side had another scare when McGuigan beat Stevie Hammell on the right wing and fired just wide of the near post.

Motherwell finally forced Parry into some serious action when Sutton met Lawson's corner but the Rovers goalkeeper proved up to the task with a save to match his name before scrambling the ball to safety.

Albion stunned Motherwell when Ryan Tiffney laid the ball back for Phillips to fire a left-footed shot into the corner of the net, with Nielsen getting a hand to the ball but being unable to keep it out.

Anier had a good chance in injury-time but sliced well wide and the Motherwell fans vented their anger at McCall and the players before applauding the underdogs.