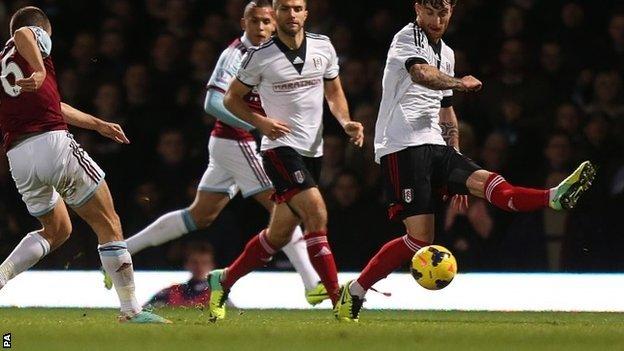 West Ham easily saw off Fulham to increase the pressure on Cottagers boss Martin Jol, whose side have now lost five Premier League games in a row.

The Hammers hit the post through Modibo Maiga in a one-sided first half, before Mohamed Diame's deflected shot put them ahead straight after the break.

Fulham created little before Carlton Cole slid in to make it 2-0 and Joe Cole curled home a third late on.

Jol admitted before kick-off he if Fulham lost this match and his side's performance, just as much as the result, will have done little to improve his prospects of staying in his post.

The Cottagers were not completely devoid of spirit, but they did not manage a shot on target and offered little creative nous or attacking threat against a team who were only above them in the table on goal difference before kick-off.

If not for a combination of the woodwork, some fine saves from Fulham goalkeeper Maarten Stekelenburg and some poor finishing from the hosts, a West Ham side who had managed only two goals in their previous five games would have inflicted a far heavier defeat.

With Maiga restored to their starting line-up, the Hammers were playing with a recognised striker for the first time in the league since the end of September.

But, between them, Sam Allardyce's starting XI had only managed two league goals this season and their lack of quality and confidence in front of goal kept Fulham in the game for far longer than they should have been.

Carlton Cole has now scored seven goals in his last six Premier League games against Fulham. He has not managed more than four against any other top-flight team.

West Ham attacked from the start, firing a series of crosses into the visitors' area and, from Mark Noble's free-kick, Maiga's near-post header cannoned back off the post.

Another set-piece delivery, this time a Stewart Downing corner, was met by James Collins as the home side threatened again, but his header bounced wide.

More home chances came and went and Fulham, who had only a few flashes of Adel Taarabt's fancy footwork to show for the first half, were grateful to get to half-time with the game still goalless.

Jol's luck would not last much longer, however, as the Hammers finally found the net just 75 seconds into the second half.

Steve Sidwell hesitated after being caught in possession by Diame, claiming Scott Parker had been fouled, and the Senegal midfielder advanced to the edge of the area before firing in a shot that deflected off Fernando Amorebieta and wrong-footed Stekelenburg.

Fulham did not improve after going behind and Maiga and Matt Jarvis both had chances to increase West Ham's lead, while Downing saw a cross drop on to the bar and Ravel Morrison missed an almost open goal.

Kasami's fizzing effort belatedly gave home keeper Jussi Jaaskelainen something to think about, before the Hammers substitutes combined to make the game safe in the final 10 minutes.

Carlton Cole slid home a Downing cross for his first goal since rejoining the club in October and Joe Cole curled home a Morrison pass to ensure the scoreline reflected their side's dominance.

With a trip to fellow strugglers Crystal Palace to come on Tuesday, Allardyce had described this as a "season-defining" week for his team before kick-off.

Victory means they climb away from the relegation zone, but Fulham remain rooted in the bottom three.

Shots on Target
Home12
Away0