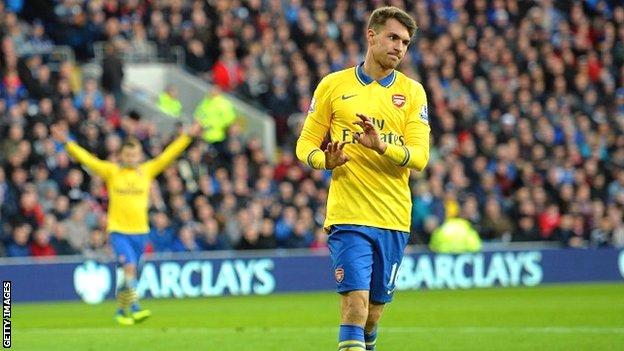 Aaron Ramsey returned to Cardiff with two fine goals as Arsenal won in the Welsh capital to move seven points clear at the Premier League summit.

Ramsey teed up Jack Wilshere to hit the bar, before nodding the opener against his old club from Mesut Ozil's cross.

Fraizer Campbell almost equalised for Cardiff with a header that Wojciech Szczesny kept out with a crucial save.

Arsenal made it two when Ozil set up Mathieu Flamini to slam home and Ramsey drilled a third after a slick attack.

Wales international Ramsey joined Arsenal from Cardiff in 2008, when just 17. He refused to celebrate his goals, which were applauded by sections of the home crowd, and some Cardiff fans joined their Arsenal counterparts in singing Ramsey's name late on.

He responded by tapping both hands against his head - known by Cardiff supporters as the Ayatollah - following an impressive display.

The result gives Arsenal breathing space above their title rivals, with none of Liverpool, Chelsea, Manchester City or Manchester United playing until Sunday.

Cardiff now sit just one place above the relegation zone but arrived buoyed by a their latest impressive home result following victories over Manchester City and Swansea.

Arsenal, however, presented arguably the toughest test of their maiden Premier League season to date and it was immediately clear why.

With only a minute on the clock, Ramsey fed Wilshere and the England midfielder's curling strike from 20 yards came back off the woodwork as he looked to add to a against Marseille.

The hosts went close as Campbell headed wide from a Kevin Theophile-Catherine cross and Jordon Mutch later hooked off target following Peter Whittingham's free-kick, yet those were rare forays forward.

Arsenal might have taken the lead through Olivier Giroud, but the Frenchman stopped playing in anticipation of an offside flag that never arrived, enabling Steven Caulker to block his eventual shot.

They made amends when Ozil crossed from the left for an on-rushing and unmarked Ramsey to direct a clinical header past David Marshall.

Arsenal continued to probe and Giroud found Ramsey to fire wide prior to half-time, and it was roles reversed after the break as Ramsey picked out Giroud and his shot was cleared off the line by Ben Marshall.

That reprieve seemed to rejuvenate Cardiff, their supporters responding in kind, and it needed a magnificent low one-handed save by Szczesny to stop Campbell's header from an Andrew Taylor cross.

With Malky Mackay's side pushing hard to draw level, they were leaving themselves exposed to counter-attacks and Arsenal capitalised with a crunching first-time finish by substitute Flamini from Ozil's cute pass.

They confirmed victory when Peter Odemwingie lost possession and Theo Walcott, another substitute, raced away before squaring for Ramsey to convert his 13th goal in all competitions this season.