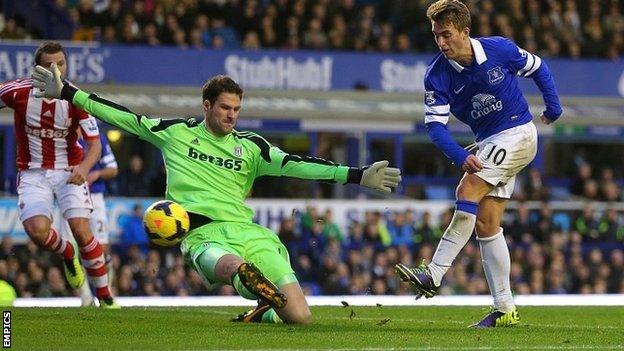 Everton moved into the Premier League top four after Gerard Deulofeu masterminded a thumping victory over Stoke on his first league start.

The Spanish teenager had already threatened before firing in at the near post following a neat interchange.

Deulofeu then crossed for Seamus Coleman to make it 2-0 after the break.

Bryan Oviedo added a third from 20 yards after a corner, and Stoke's Peter Crouch drew a save from Tim Howard, before Romelu Lukaku made it four.

It was the Belgian striker's eighth Premier League goal in nine games but Deulofeu was the game's driving force.

The 19-year-old, on loan from Barcelona, earned his chance ahead of Kevin Mirallas on the right side of Everton's midfield and Stoke - who were without the injured defender Robert Huth - could not cope with his strong dribbling and accomplished passing.

The result maintained Everton's unbeaten home record in 2013 and sets them up perfectly for a week including trips to Manchester United and Arsenal.

With the injured Leighton Baines replaced by Oviedo at left-back and Everton boss Roberto Martinez selecting Leon Osman and Deulofeu instead of Ross Barkley and Mirallas, the performance also underlined the growing depth to the Spaniard's squad.

Everton defenders have now scored five Premier League goals this season, more than those of any other side

The hosts were a threat from the start, especially Deulofeu, who showed himself worthy of his first Premier League start after a number of strong showings from the bench.

He tested Asmir Begovic with an early free-kick and twice went close before his goal on the stroke of half-time.

Osman, who worked behind lone striker Lukaku, had a busy first half too, drawing a decent stop from the Stoke goalkeeper with Jonathan Walters's shot the visitors' only reply of note.

Deulofeu's well-taken first goal saw him collect the ball on the left, play a neat one-two with Steven Pienaar, and fire into the top corner at the near post after the ball had bounced off Gareth Barry.

After the break, the hosts broke down the left and Deulofeu checked back, crossing with his right foot. Barry, who was quietly influential for the Toffees in midfield, mis-controlled but the ball fell to Coleman, who swept in.

Deulofeu could have added another before Oviedo's first goal for Everton extended the hosts' lead.

It was a strike worth waiting for, as Deulofeu took a short corner to the Costa Rican full-back on the edge of the area. He took one touch before slamming in right-footed from 20 yards.

Oviedo then supplied the centre for Lukaku's close-range finish, to send the Everton fans home in confident mood for the challenges of the week ahead.

For the Potters, defeat sees them slip to 16th and boss Mark Hughes may have to reconsider his attacking options after a performance in which his team offered barely any threat until they went two goals behind.

Stoke boss Mark Hughes: "If we are honest with ourselves Everton were better, they had more options, were more dynamic and had more pace but we have to pick ourselves up for Wednesday [against Cardiff]. We have to do better then.

"We were disappointed with what we produced. With a minute to go to half-time we should see the half out and to concede either side of half-time knocked the stuffing out of us. The last two Everton goals were a case of us chasing the game."