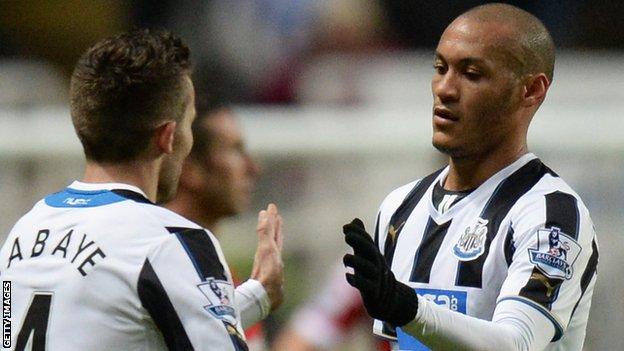 Newcastle United moved up to fifth in the Premier League table with victory over West Brom.

Yoan Gouffran scored for a third successive match at St James' Park to make it four wins out of four for Alan Pardew's side.

Albion's Chris Brunt equalised before Moussa Sissoko stole the headlines with one of the goals of the day.

His driven shot, with the outside of his boot, gave Boaz Myhill in the visitors' goal no chance.

Victory means the Magpies are now enjoying their best run for 19 months, as Alan Pardew prepares to celebrate three years in charge of the club.

The only surprise was Loic Remy's failure to find the net after scoring eight goals in his previous eight games for Newcastle - though he had the only other chance of a flat first half, rising highest to head an effort off the shoulder of Billy Jones and out for a corner.

The opening goal was gifted to the hosts by Myhill, who failed to properly clear a high hanging corner from Yohan Cabaye and punched it straight to Gouffran, who headed into an empty net.

But it was only in the second half that the game came alive, Myhill immediately forced to save at the feet of Remy to keep the Baggies in the match.

Their equaliser came completely against the run of play, Brunt smashing home from a tight angle after Morgan Amalfitano's cross was flicked on by Shane Long.

If Brunt's finish was impressive then what followed from Sissoko was superb - not only the strike but the clever low header from Remy to play him into space.

West Brom tried in vain to find the equaliser, although the introduction of striker Saido Berahino, who signed a new three-and-a-half-year deal in midweek, gave them more purpose.

The visitors swung cross after cross into the home side's penalty area but Newcastle, and centre-half Mike Williamson in particular, stood strong.

For a gallery of photos from Saturday's Premier League games, visit the BBC Sport Facebook page

Newcastle manager Alan Pardew: "I genuinely sensed in the dressing room today that they believed they could win and they put the effort in to get the win and that resilience is what got us the victory.

"We have got a tough game on Wednesday against Swansea and a real humdinger against Manchester United next weekend, which we look forward to."

West Brom boss Steve Clarke: "I think in the first half we were a bit passive. We didn't pass the ball well enough but the reaction in the second half was good. We got back into the game but a wonder strike has stopped us getting anything in the end."