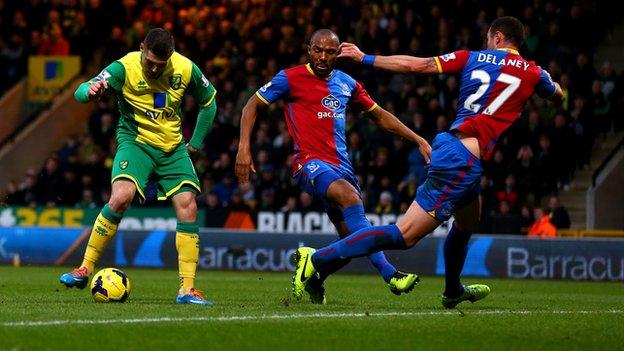 Palace were denied an equaliser when Barry Bannan's drive was headed onto the bar by Martin Olsson.

But Norwich moved away from trouble with a third home win of the season.

Former Stoke boss Pulis has never been relegated in 21 years of management.

But the 55-year-old has his work cut out if he is to continue that record, with Palace six points from safety after just two wins since winning promotion last season.

Pulis will be encouraged with the way his side responded to falling behind but Palace's worrying lack of firepower - seven goals in 13 Premier League matches - needs to be addressed.

Palace arrived at Carrow Road with back-to-back clean sheets against Everton and Hull, but were fortunate not to be 2-0 down inside the opening 15 minutes.

Elmander was denied his first top-flight goal since arriving on loan from Galatasaray when his clever backheel from Nathan Redmond's free-kick cannoned against the underside of the bar.

Teenager Redmond then forced a fine save from Julian Speroni, before the 19-year-old played a role in his side's goal.

Redmond's pace proved too much for the Palace defence, his pass landing at the feet of Elmander, who allowed Wes Hoolahan to lay the ball across the six-yard area for Hooper to slot home.

Palace responded through Bannan, who was denied an equaliser two minutes later when his fierce drive was deflected onto the underside of the bar by Olsson.

Pulis's side were much improved after the interval.

They went close to equalising when Dean Moxey's low cross into the Canaries area was almost sliced into the net by Norwich defender Sebastien Bassong.

But it was Jimmy Kebe who went closest to equalising in the closing stages, the former Reading player firing narrowly wide from 18 yards.

Tony Pulis has suffered defeat in his opening games in charge of Bristol City, Portsmouth, Stoke (both spells) and Crystal Palace.

Norwich, who are away to Liverpool on Wednesday, have now won back-to-back home games and climb two places to 14th in the table.

"It feels like a big win for us. We played very well in the first half and scored a good goal, but we knew they would come back.

"It is never comfortable viewing when you look at the league table and you are in a position you do not want to be in.

"However many places we have jumped [in the table] it is a nice feeling."

"You have to take your chances. We did not have the breaks.

"How [Norwich defender Sebastien] Bassong gets that [clearance] over the crossbar from there, it was unbelievable.

"Then the kid who stops Barry's shot from going in with his header, Cameron had a really good chance, so we have had the opportunities."