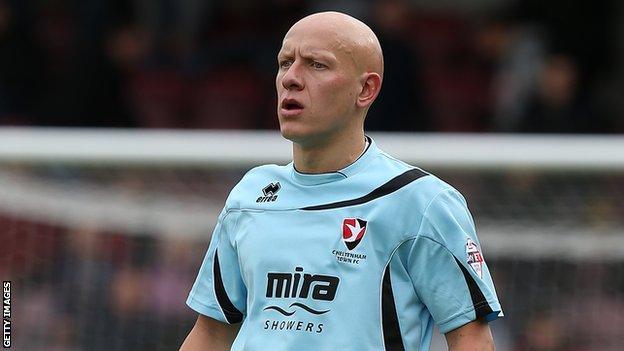 The Shrimpers looked to be heading to the top of League Two after Kevan Hurst tapped in Barry Corr's knock down.

But in the fourth minute of injury-time Anthony Straker was adjudged to have handled in the box and Richards stepped up to slot the ball home.

Earlier, Daniel Bentley kept out Kemar Roofe and David Noble, while Richards had a goal ruled out for offside.

Southend struggled to create any clear cut chances after their goal with John White's 25-yard strike which fizzed just wide of the post their best opportunity.

"It's disappointing, 25 seconds from the the end we were top of the league and now we're still in third.

"It's been a magnificent month, a fantastic run, but today just wasn't our day. We didn't get into any kind of rhythm.

"To be brutally honest if we had won the game it would have been steal.

"I thought it was a harsh decision [the penalty awarded to Cheltenham]. I thought Anthony Straker was fouled at the back post. The push from the striker has caused his hand to hit the ball, as opposed to the other way round."

"Credit to the work-rate that the team have put in, we were just desperately disappointed to go down 1-0 at half time.

"The spirit in the squad just kept us going, and the 96th minute equaliser probably just sums up where we are at the minute.

"Ifs, buts and maybes don't get you where you want - results, winning games, that's what we're after."

"I think we're playing pretty solidly, not letting in the goals that we stupidly conceded early on, and I have every confidence in the group we'll start catching teams up eventually."