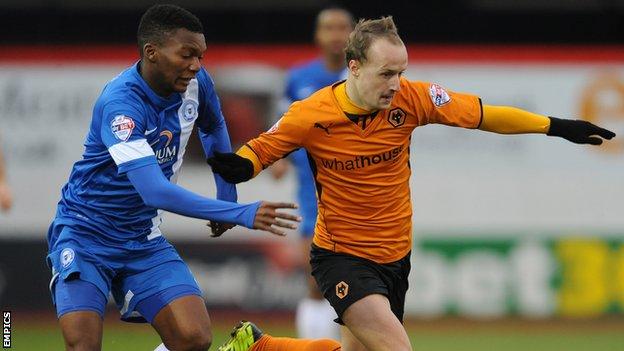 Peterborough United ended a run of five straight League One defeats with their first ever home win over Wolves.

Home captain Michael Bostwick scored the winner, firing a low free-kick under the wall and past Wolves keeper Carl Ikeme 11 minutes from time.

Wolves' best chance fell to winger Bakary Sako, who shot into the side netting from a narrow angle.

Wolves' run brought to a halt

Before their defeat at London Road, Wolves had taken 27 points out of a possible 33 since losing at home to Walsall on 17 September

The O's, second in the table before the start of play, went above Wolves on goal difference following their 1-1 draw with Sheffield United.

Leigh Griffiths and Danny Batth were also off target with headers for the visitors in the first half, while Sako tested home keeper Bobby Olejnik with a volley after the break.

But Bostwick made the decisive contribution after Richard Stearman fouled Peterborough substitute Nathaniel Mendez-Laing to inflict a first away defeat of the season on Wolves.

"I felt we did deserve it. The second half we were far better with more tempo to our game.

"It was a gutsy, brave performance. It was never a classic and it was never going to be. Concentration had to be on making sure we didn't make any mistakes.

"I felt today was a day for the substitutions. Mendez-Laing does what he does and sometimes you have to accept to make a career out of the game he might be an impact player. Of course he wants to start but he's better when he comes on, there's no question about that.

"The result was always going to be the important thing today and we've got one. We're eight points behind, hopefully that's our bad run out of the way and I do feel now that we can go on a run similar to the start of the season."