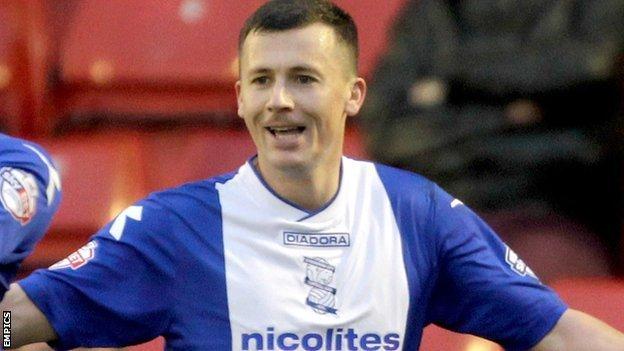 Blues right-back Paul Caddis scored twice, opening the scoring as he ended a run with a powerful shot.

The Scotland U21 defender extended the lead from the penalty spot after a Jean-Yves M'Voto foul on Nikola Zigic.

Zigic chipped in a third before half-time as Birmingham secured a fifth league win of the campaign.

The defeat left Barnsley at the bottom of the table, six points from safety.

The home side did not help themselves as they played a hand in the visitors taking the lead.

M'Voto did well to take the ball off City striker Jesse Lingard, before giving the ball away to Caddis, who shrugged off challenges from David Perkins and Paddy McCourt before to rifling in a shot.

Zigic went down following a M'Voto challenge after a corner and referee Kevin Wright pointed to the spot. Caddis then stepped up to send ex-Blues keeper Jack Butland the wrong way.

Caddis also had a hand in the third goal when his misplaced pass was diverted into the path of Zigic by Jim O'Brien and the Birmingham forward dinked an effort over Butland.

Barnsley rarely mustered a goal threat as Birmingham saw out the game.

"We've been on the end of some strange decisions this season and we've had to dust ourselves down, I'm sure David [Flitcroft] is frustrated with that.

"He did have a conversation as Nikola [Zigic] came off and he asked him hand on heart did he think it was a penalty, and Nikola replied that he did.

"The referee seemed to be in a good position."