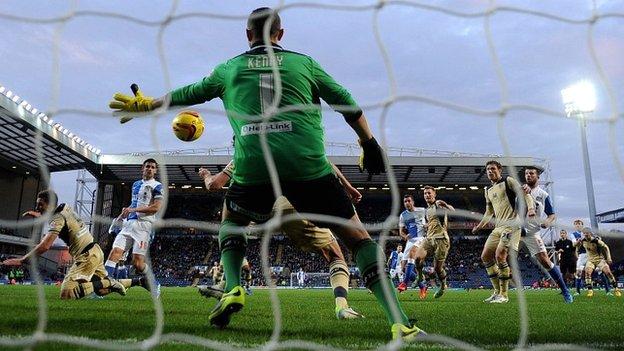 Tommy Spurr scored his first home goal for Blackburn as they beat Leeds to secure a first victory in three games.

David Dunn had gone close for the hosts before the midfielder's corner was prodded home by defender Spurr on the stroke of half-time.

Before Spurr's strike, Leeds had also had a chance to go ahead when Danny Pugh was left one-on-one with Jake Kean but the home keeper saved wonderfully.

Defeat for Brian McDermott's side ended a run of three consecutive wins.

It is over a decade since Blackburn last beat Leeds at home in the league. Garry Flitcroft scored in the 1-0 Premier League victory in September 2002

It means Leeds remain seventh, while victory for Rovers - their first over any side in the top nine - moves them to within four points off the play-offs.

For all of Blackburn's efforts, though, it was Leeds who carved out the best chance of the half when Luke Varney headed on to Ross McCormack, whose delightful flick found the onrushing Pugh, with just the goalkeeper to beat - but Kean diverted the ball behind.

Chris Taylor, who replaced Lee Williamson, impressed throughout and forced a fine save from Kenny just before the interval. The former Oldham man collected Josh King's cross 20 yards out and swivelled before firing a left-foot shot that the Leeds goalkeeper did well to get down to.

Blackburn's pressure finally told in first-half injury time when Spurr got on the end of Dunn's corner to poke in.

The visitors showed signs of life with 16 minutes to go when Rudolph Austin found space for a shot in the area but lashed into the side netting.

McCormack also went close when he cut in from the left late on, but his shot went wide.

Blackburn manager Gary Bowyer on Tommy Spurr: "He's been a fantastic signing for a free transfer. You know exactly what you're going to get and fans love him because of that.

"His performances have been very, very consistent for us and we're delighted for him. We've encouraged him to score more goals and he always gives us a good celebration when he does!

"We showed some unbelievable character. We matched what Leeds threw at us but still had bravery to play our game and that was important and we played some good stuff today."

Leeds boss Brian McDermott: "I didn't think we deserved to lose. I think if we'd have scored in the first half we would have won the game.

"They took the ascendancy in the last 15 minutes of the first half, scored the goal from a set-play which is obviously disappointing, then it became a real battle and our players tried to get something from the game. It wasn't pretty and we couldn't quite do it which was disappointing.

"The first goal today proved to be the most important."