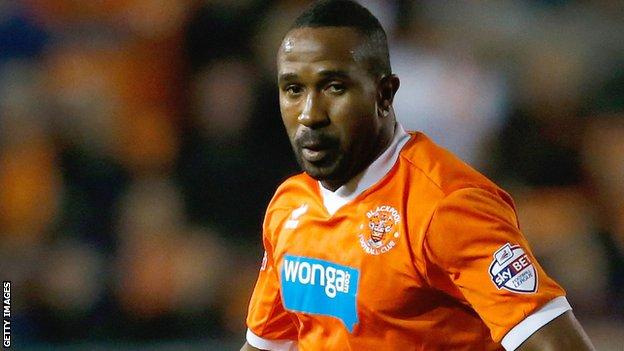 Fuller opened the scoring for the hosts with a close-range finish early on.

Wednesday had plenty of chances to equalise, with Jeremy Helan and Connor Wickham both failing to finish gilt-edged chances.

Gosling's left-foot strike in the second half sealed the points for Blackpool.

Sheffield Wednesday are the only club without a clean sheet in English league football, and the 90th minute consolation goal from Conor Wickham in last Saturday's 2-1 defeat by Huddersfield is their only goal in the last 15 minutes of a Championship game

The Seasiders are fourth in the Championship while Wednesday are 23rd, six points adrift from safety.

With manager Paul Ince returning to the dug-out on the back of his five-match stadium ban, Blackpool made the perfect start to the afternoon as they took the lead inside the opening 10 minutes.

Tom Ince whipped a low corner to the near post and Fuller peeled away from his marker to turn the ball home inside the six-yard box.

But the visitors only had themselves to blame for failing to get back on level terms soon after.

Wickham broke free down the right-hand side of the area and pulled the ball back for the unmarked Helan, eight yards out, but with the goal gaping he somehow side-footed wide.

A free-kick from Lewis Buxton found Miguel Llera inside the area and his header flew narrowly wide of Matt Gilks' left-hand post.

With just two minutes remaining of the opening period, a right-wing cross from Roger Johnson picked out Jose Semedo but his wayward header again let the Seasiders off the hook.

While the Owls were unfortunate not to have at least drawn level prior to half-time, the second period was a far more enterprising affair, with chances at both ends.

Jacques Maghoma fired an early sighter over the crossbar for the visitors before Ince cut in from the left flank and forced a good save out of Damian Martinez with a 20-yard drive two minutes later.

As the game began to open up, the sides continued to trade blows and Gary MacKenzie's header and another Ince drive both forced good saves out of Martinez, either side of Semedo's tame shot.

Blackpool sealed victory when left-back Tyler Blackett - on loan from Manchester United - broke down the left and pulled the ball back for Gosling, who side-footed home from 10 yards.

Blackpool boss Paul Ince, who returned to the dug-out after a five-match stadium ban: "It's great to be back and even better with three points.

"You don't realise how much you miss it. Five games is a long time.

"I was concerned if we'd got beat it would be my fault. Alex Rae and Steve Thompson have done a fine job. I wasn't sure whether to sit in the stands or the touchline and I was glad I did.

Under-pressure Sheffield Wednesday manager Dave Jones, on his future: "I speak to the chairman every single day and you'll have to ask him if he's going to get rid of me. I don't know the lottery numbers and I don't know what my future will be either.

"This club has had 12 or 13 managers in recent years but sacking managers isn't the way forward.

"We're all fighting for our jobs, but players have to start putting chances in the back of the net.

"We were probably the better team until the second goal. But we let players run off the back of us, we didn't track the runners and they got a second and it was game over."