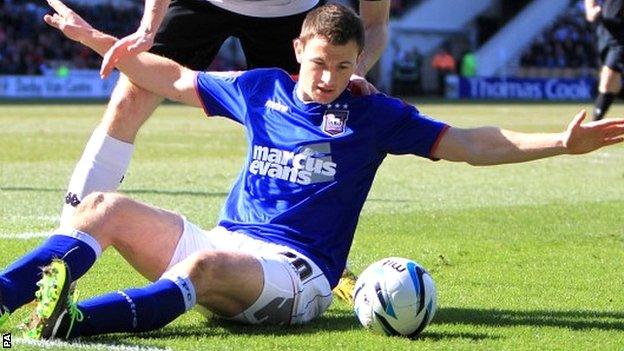 The defender converted Aaron Cresswell's corner for the only goal in a game that showed why both teams have struggled for consistency this season.

Charlton's best opportunity fell to Rhoys Wiggins, whose shot was palmed on to a post by Dean Gerken.

Charlton have now won only three of their last 13 matches

Tempers boiled over in injury time as Addicks pair Michael Morrison and Frank Nouble were booked for a confrontation.

It is a result that sees Ipswich climb to 11th in the Championship, while Charlton sit two places above the relegation zone in 20th.

Town started at an electric pace and home goalkeeper Ben Alnwick was forced to save well from a Smith header before making an even better double stop to deny Darryl Murphy and Christophe Berra.

But he was eventually beaten when Charlton failed to deal with a corner and Smith headed home from Cresswell's delivery.

The hosts pressed for an equaliser and Dale Stephens headed just wide, while Simon Church was denied at the back post by Cole Skuse and Wiggins' shot was pushed on to the woodwork by Gerken.

Danny Green, Joe Pigott and Marvin Sordell were all introduced in the hope of finding a breakthrough, but Ipswich stood firm as Charlton squandered countless promising positions.

"We haven't scored enough, that is in black and white. We don't concede too many for a side in the bottom half, but goals win games.

"You need to score, even if you just nick one that can be enough. You have to take the chances that come your way, then it gives you something to build on or hang on to.

"I won't use playing Tuesday against Doncaster as an excuse, the players are fit enough to play Tuesday, Saturday, Tuesday."

"We've played better than that away and lost games. The three points is the biggest plus, then winning away and then the clean sheet.

"This league will be tight until the end. Look at Doncaster losing to Charlton in midweek and then beating QPR today.

"It will be 50-odd points to stay up again and anyone of us can beat anyone else. That is what makes it such a tough evil league to play in."