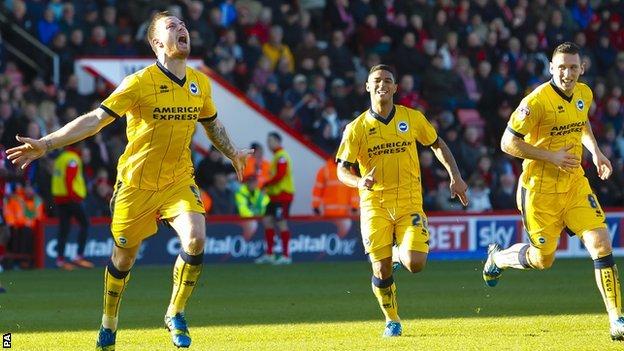 Matt Ritchie put the hosts in front with a powerful 25-yard strike before he had an effort saved at close range by Brighton goalkeeper Tomasz Kuszczak.

Brighton improved after the break and Barnes angled in a well-struck half volley on the turn to level.

A Steve Cook header and Brett Pitman shot went wide for the Cherries, who had to settle for a draw.

Bournemouth have now gone six Championship games without a win.

Brighton were chasing a fourth successive win but struggled in the first half and it was no surprise when they went behind.

The visitors had seen Inigo Calderon half-volley over from 10 yards before the miss was punished when Charlie Daniels rolled across a free-kick across for Ritchie, who powered a strike into the bottom corner past a wrong-footed Kuszczak.

The Seagulls' stopper was quickly called upon again when he had to save at point-blank range when Ritchie tried to side-foot in a Daniels cross at the far post.

Ritchie was providing his side's main threat and came close to a second when a deflected free-kick went just wide, before he set up Brett Pitman, whose effort was smothered by the on-rushing Kuszczak.

The visitors raised their game in the second half and equalised in stunning style. Barnes controlled a throw-in and, on the turn, rifled in an angled half-volley.

The home side's main problem was not taking their chances and they were guilty of that again when Cook steered a 12-yard header wide.

Pitman dragged an effort the wrong side of the post as the honours finished even at Dean Court.

"We always needed a second goal.

"We did not front screen the striker from the throw-in, which is disappointing from our point of view, but it is a great goal, so credit to him.

"I felt the positive was that we did look like we were going to score and in the previous home games we had struggled to break teams down."

"Ashley Barnes deserved his goal because he works hard for the team and it is not easy to play every game against two centre-halves.

"For his confidence it will be very good but he is a player who is working very hard - it is not easy to play alone up front.

"I am very pleased with the second-half performance from all the players."