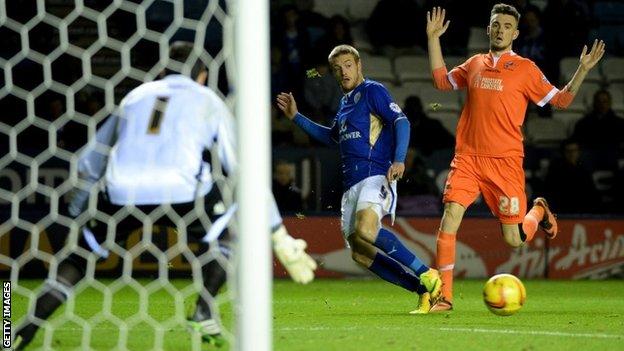 Jamie Vardy scored twice as Leicester moved three points clear at the top of the Championship with victory over Millwall at the King Power Stadium.

Winger Lloyd Dyer got the Foxes off to a great start when he volleyed in from Danny Drinkwater's cross.

Forward Vardy then scored twice in two minutes after the break.

His first was a cool finish from Kasper Schmeichel's throw-out, before he rounded keeper David Forde for his sixth goal of the season.

The Foxes' seventh home win of this campaign was their first league victory over Millwall in five attempts - the Lions having done the double for the past two seasons - and Leicester duly made a nervous start.

Australia international Scott McDonald was given plenty of time and space to fire in a third-minute shot for the visitors, but it flew well wide.

However, the Foxes settled down and took the initiative with a well worked and splendidly taken goal. Marcin Wasilewski sent Drinkwater clear down the right and his excellent cross was volleyed home by Dyer.

Forde then pulled off a stunning stop to keep out a shot from the lively Anthony Knockaert and followed that up by blocking Dyer's header.

Millwall, who briefly came into the game with a sequence of four successive corners, were fortunate to be only one goal down at half-time.

And their hopes of a second-half fight-back were crushed by two goals in quick succession from Vardy.

His pace brought him his first when he picked up Schmeichel's ball inside his own half and raced away before beating the advancing Forde.

Two minutes later, he seized on a poor headed back-pass by Mark Beevers to go round Forde and slot in.

Millwall's only clear effort on goal came when Steve Morison hit the bar with a header from Lee Martin's cross just after the hour as the Lions finished the day in 21st place, five points clear of the relegation zone.

"I was very pleased for Jamie Vardy. I don't think anyone who watches us would have anything but praise for his tireless efforts on behalf of the team.

"I know his team-mates will be very pleased for him to get two goals. Last week it was David Nugent scoring two goals and this week it is Jamie."

"I was very disappointed. We wanted to hang in there which is why we had one up front and five in midfield.

"We started okay and we knew Leicester would come out of the traps and try to win the game early.

"We looked as though we had got ourselves into the game and then conceded a very poor goal to go behind."

Shots on Target
Home13
Away1