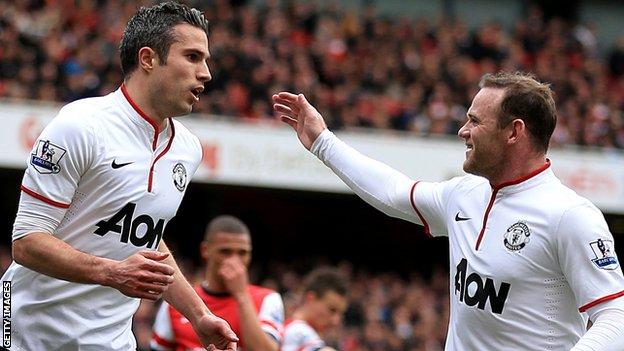 Champions United will be Cardiff's opponents at the Cardiff City Stadium on Sunday.

"If I was picking then I would probably go for them purely because they are tried and tested," Turner said.

"They know that they're world class, they know their jobs.

"There's obviously other strike partnerships that potentially could be on that level.

"But I don't think there's a strike partnership with that much experience and that many Premier League goal already in the bank."

Rooney, who has scored 146 league goals for United, says he has been given a "new lease of life" under manager David Moyes after falling out with previous boss Sir Alex Ferguson.

Dutch international van Persie has scored 33 Premier League goals for United since joining from Arsenal for £24m in August 2012.

Moyes endured a difficult start to life at Old Trafford but United go into Sunday's game at Cardiff having won their last three league games and unbeaten in nine in all competitions.

Centre-half Turner was in the Coventry City side which beat Manchester United at Old Trafford in a League Cup tie in September 2007.

The 25-year-old is looking forward to testing himself against David Moyes's side at Cardiff City Stadium where the Bluebirds beat Manchester City earlier in the season.

"Looking at the names Man Utd could put out it's exciting for everyone in the back four because it's a real chance to test yourself against the best. We don't have much to lose.

"It's not just this week, but every week there's a different personal challenge. I feel like every week I'm on trial

"I don't see it as the biggest test, I see it as a different test. Whether it's a bigger test than the Man City game and the Tottenham game I'm not sure.

"But it's a massive test, I accept that."