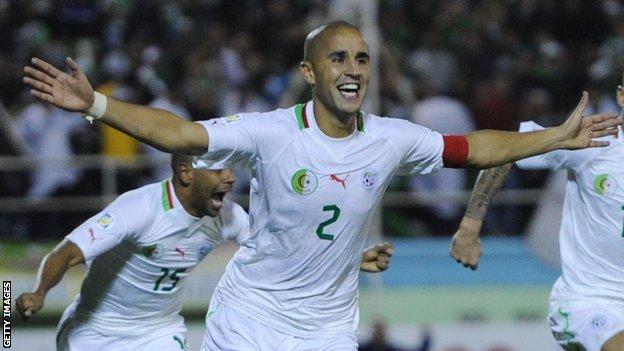 The Burkina Faso Football Federation (FBF) has complained to Fifa over claims that Algeria used an ineligible player in the second leg of the World Cup play-off tie.

The FBF says Algerian defender Madjid Bougherra should have been suspended for two yellow cards in earlier games.

Bougherra scored the only goal in Algeria's 1-0 win that saw them qualify for Brazil on the away goals rule.

The federation has also complained about Senegalese referee Badara Diatta.

According to FBF president Sita Sangare, Bougherra picked up a yellow card during the group stage of qualifying against Mali and also went into the book during Burkina Faso's 3-2 win in the first leg of their play-off, which should have ruled him out of the second leg.

The teamsheets on the Fifa website do not show a yellow card for Bougherra in the first leg of the tie.

Zambian referee Janny Sikazwe, who was in charge of the first leg, told BBC sport that what is on the Fifa site is what he had reported back after the match.

He also said that he had not booked any players in the tunnel or away from the field of play.

Sangare also argues that Diatta failed to play out the full four minutes of injury time, depriving them of the chance to score a late equaliser which could have qualified them for their first ever World Cup.

The African qualifying campaign has been overshadowed by several matches that were overturned by Fifa for nations using players who should have been suspended.

Cape Verde were denied a place in the final round of play-offs when football's world governing body Fifa ruled they had used an ineligible player in their final group win over Tunisia.