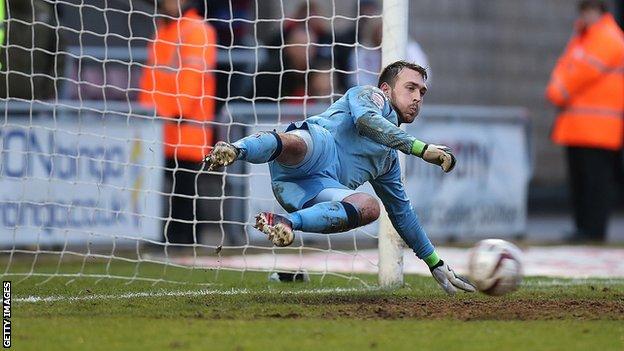 Goalkeeper Josh Lillis says Rochdale must not be distracted by thoughts of a potentially lucrative tie in the FA Cup third round when they take on League One side Rotherham on Saturday.

Dale, who are fifth in League Two, have not reached round three since 2005.

"You can't really think about that. You've got to take Rotherham first and we're not going to take them lightly," Lillis told BBC Radio Manchester.

"We'll put all our energy into that game and see where we go from there."

The Millers are sixth in the third tier and are unbeaten in their last seven matches in all competitions, while Rochdale have failed to score in their last two league games and have taken just one point from those outings.

But the 26-year-old believes Keith Hill's men can cause an upset at the New York Stadium.

He added: "People will probably say it will be a home win, but we're quietly confident that we can go there and give them a good run for their money. If they've been to the last couple of games, they might underestimate us and that might benefit us.

"The FA Cup is all about heroes, especially with the underdogs and the lower-ranked teams."

Rochdale's last appearance in round three was a 4-1 defeat at Charlton, then a Premier League club, almost nine years ago.