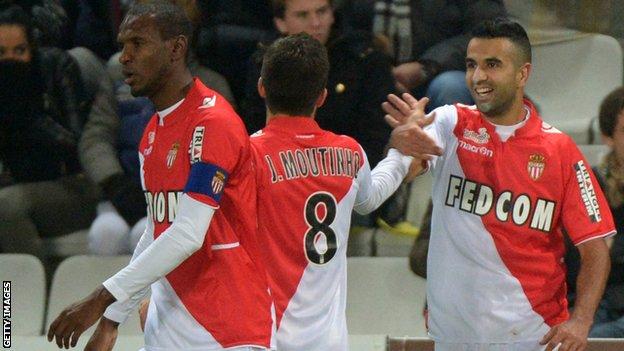 His replacement, 17-year-old Anthony Martial, had a hand in the winner as Obbadi's long-range effort gave Monaco a win that keeps them in third place.

Alejandro Bedoya should have equalised late on but shot over from close range.

Monaco moved to within five points of Ligue 1 leaders Paris St-Germain but victory had looked unlikely following a subdued first half in which chances were few and far between.

Monaco went close early in the second half when Falcao squared the ball but Nantes captain Olivier Veigneau cut out the danger.

Former Chelsea boss Claudio Ranieri opted to take off Falcao just after the hour mark and it was move that paid dividends just seven minutes later.

Substitute Martial wriggled his way through and fed a pass to Rodriguez, and though his shot was saved by Riou, the ball dribbled to Obbadi, whose first-time shot flew into the back of the net.

Monaco had to withstand some late Nantes pressure as Issa Cissokho had a goal chalked off for a foul inside the area, before Bedoya flicked the ball over with just Monaco keeper Danijel Subasic to beat.